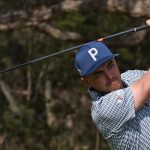 Rickie Fowler hits his tee shot on Friday on the 14th hole at TPC San Antonio.

Rickie Fowler is playing this week to play next week. He’s yet to qualify for this year’s Masters, and with the first major of the year starting in six days, now only a win gets him in for an 11th straight year. On Friday, Fowler played bogey free for the first time in 85 rounds. Georgia’s on his mind. Still. Here are three things you need to know after Friday’s second round of Valero Texas Open at TPC San Antonio.

The leader, too, could advance to Augusta with a win.

Cameron Tringale followed a first-round 66 with a 69, and he leads by two over Jordan Spieth and Matt Wallace. Brandt Snedeker, Erik van Rooyen, Kevin Stadler and Kyle Stanley are four shots back.

Tringale started with two bogeys before birdieing holes 13 through 17, his fourth through eighth holes after starting on the back nine.

“I was two over through two, so I was really just trying to get back into the round and get into the red numbers again,” Tringale said. “I think when those things start to happen, you’re just kind of focused on where you’re at. But then I looked back and I thought, wow, that was five in a row and I didn’t even birdie 18, which is probably the easiest of all of them.”

Jordan Spieth is two back

Spieth continued his recent surge and shot a two-under 70, while Wallace shot a bogey-free 68. Among the players four back, Snedeker shot a five-under 67 with two bogeys and a double bogey.

Among the players not making the cut are Tony Finau and Phil Mickelson, who shot a 69 and was 10 strokes better than his first round.

“I think part of it has just been the patience part and sticking it out and kind of keeping grinding, keep working, keep kicking down the door and it’s going to fall down at some point here,” Fowler said at the Honda Classic two weeks ago.