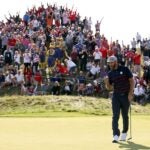 After a dominant performance in the morning foursomes session at the 2021 Ryder Cup, Team USA’s positive momentum continued into the afternoon fourball session on Friday at Whistling Straits.

Through the second of five sessions, the Americans lead 6-2. Here’s everything you need to know about each of the afternoon’s four fourball matches.

DJ was one half of the morning foursomes team that took down Paul Casey and Viktor Hovland 3 and 2. Paired with Olympic gold medalist Xander Schauffele (who also put on a show alongside Patrick Cantlay on Friday morning, defeating Rory McIlroy and Ian Poulter 5 and 3) in the opening afternoon fourball match, Johnson and Schauffele continued their seemingly unstoppable momentum. DJ was a putting machine. The duo was 3 up after five and, despite a few dropped holes mid-round, never looked back.

Jon Rahm and Sergio Garcia were the lone European victors in the morning foursomes session, but European captain Padraig Harrington elected to rest Garcia for the afternoon, and instead paired his star player with Englishman Tyrrell Hatton. It turned out to be a hard-fought match, with the lead changing six times through 11 holes. DeChambeau even pulverized a drive 417 yards! Things were still neck-and-neck through the first half of the back nine, when DeChambeau holed a five-footer on No. 15 to pull ahead 1 up — a lead they maintained all the way to the final hole. This was the first match of the day to reach the 18th hole, where Tyrrell Hatton ultimately made a clutch eight-footer for birdie to win the hole and scratch out a half point for Europe.

Team USA captain’s picks Harris English and Tony Finau put on a serious show against the all-Irish team of Rory McIlroy and Shane Lowry. After going 1 down through 5, English and Finau birdied four of the next five holes to take a 3 up lead through 10. Finau made six birdies on his own, and made the clinching four-footer on No. 15 to close out the match, giving the Americans their first point of the afternoon session.

Justin Thomas is a famously gritty competitor and at no time was that more apparent than on the par-4 9th on Friday. Thomas and Cantlay hadn’t won a hole since the first, and were 3 down, about to make the turn. Thomas faced what appeared to be about a 30-footer for birdie to win the hole. He drained it for the win, and let off some serious steam.

It was the start of some much-needed positive momentum for JT and Cantlay, who clawed their way back to 1 down through the 12th hole — a deficit they maintained through 15. But on the par-5 16th, JT fired a fairway wood onto the green in two, while Fleetwood lost his long approach into Lake Michigan. JT then drained his eagle putt from the fringe to tie the match with two holes to play.

As the last match on the course, this turned out to be the barnburner of the day. JT had a chance to win the match outright on No. 18, but when his birdie putt ended up short, the match was tied with pars all around.