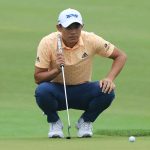 The 2021 Memorial Tournament continues Friday, June 4, at Muirfield Village in Ohio. Unfortunately, the first round was a wash-out for many players in the field. Two lengthy dangerous-weather delays meant that only 59 of the tournament’s 120 players managed to finish their opening rounds on Thursday. Those who still need to complete the first round will begin playing at 7:30 a.m. ET on Friday before starting the second round afterward. You can find full second round tee times at the bottom of this post.

Notable groupings for Memorial Tournament Round 2

Collin Morikawa jumped out to the early lead on Thursday, firing a round of six-under-par 66 that included six birdies and only one bogey. Morikawa will play the second round alongside his Round 1 groupmates Jon Rahm and Xander Schauffele at 5:29 p.m. ET. Schauffele is two shots back at four-under, while Rahm is three shots back at three-under.

Right behind Morikawa is 33-year-old Adam Long, who fired a first-round 67 and is one shot back. Long will tee off at 4:53 p.m. ET with Danny Willet and Michael Thompson

Check out complete second round tee times for the 2021 Memorial Tournament below.

How to bet on the Memorial Tournament — risk-free!