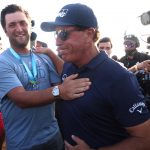 “I love Phil. He’s been a great mentor to me. And the Mickelson family is very close to me. They mean a lot,” Rahm said. “I’m not going to lie, with how windy it was out there and towards the end all I could say is, ‘I cannot believe he’s going to pull this off.'”

Rahm has formed a tight bond with Mickelson over the last few years. He was as close as anyone to Mickelson down the home stretch at the Ocean Course. After Lefty rolled in the winning putt on the 18th green, Rahm was right there (in a ‘dad bod’ tee shirt) to offer a hug.

But there’s an old adage among gamblers about betting with your head, not your heart. And leading into the PGA Championship, Jon Rahm’s head told him Phil didn’t have a prayer.

“I don’t know if I told him this, but I will tell him straight up, if I would tell you like the last person I would put money on to win that week, Phil would be one of those,” Rahm said. “It would be down there.”

“How long it is, how many drivers you need to hit, and how windy it is.”

The irony in a metaphorical bet against Mickelson is not lost on Rahm. After all, a bet has served as the foundation of the pair’s friendship for years.

Back in 2016, when Rahm first turned pro, Mickelson bet his friends that the young Spaniard (and fellow Arizona State Sun Devil) would soon become one of the top 10 players in the world. When word of the wager trickled back, his confidence surged.

“[Phil] never came and told me, ‘Hey, I got this bet, you got to get it done,'” he remembered. “I heard from other people that was a bet. And for somebody who just turned pro, it’s a huge boost.”

Rahm eventually made good on his end of the wager, even briefly ascending to the top spot in the world last year. But not even a former World No. 1 and close friend could have seen Mickelson’s victory at the PGA Championship coming — a fact that Rahm says is owed as much to the difficulty of the setup as it is to Phil’s perceived ability.

“You had a couple years where Tom Watson and Greg Norman went to the Open Championship and had a chance,” he said. “I do believe the Open would be the one event for somebody who is older to be able to win, because you can think your way around the golf course. [Kiawah], with how long it was, at the age of 50, for Phil to be able to do what he did, it’s unbelievable.”

Jon Rahm isn’t a betting man. That’s a good thing, because if he was, he’d be out some money right about now.

“He hadn’t been playing great golf, but that shows you the greatness of a great champion; it doesn’t matter.”