2021 Honda Classic leaderboard: 3 things to know after a volatile Round 3 at PGA National 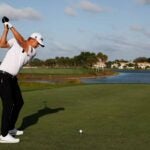 Moving Day at the 2021 Honda Classic earned its nickname, with plenty of jostling going on up and down the leaderboard. What’s old is new as the first and second round leaders swapped places again, and several former major champions made their presence known heading into Sunday’s final round. Here are three things to know after Round 3 at PGA National.

MJ back on top

Matt Jones, that is. The 40-year-old pro charged into the first-round lead with a record-tying 61 on Thursday, only to surrender that lead to Aaron Wise on Friday. But Jones held strong during a difficult Saturday at PGA National, shooting a one-under 69 to reach 10 under and a take a three-shot lead heading into the final round.

If he’s able to hold it together for 18 more holes, Jones would secure his second-career PGA Tour victory and first since 2014. Better yet, a win would earn the 83rd-ranked pro an unexpected spot in the Masters three weeks from now — only his second appearance at Augusta National — and a trip to the 2021 PGA Championship in May.

Major winners in the mix

A Matt Jones victory is no sure thing, though. In fact, several major champions are well within striking distance of the lead, and the winner’s trophy, heading into Sunday. Keegan Bradley, winner of the 2011 PGA Championship, raced up the leaderboard with a three-under 67 on Saturday. That leaves him at five under for the tournament, five shots off the lead. Considering that 36-hole leader Aaron Wise went five over to surrender his three-shot lead, which at one point on Saturday had swelled to six, anything can happen over the final 18 holes.

Two-time major winner Zach Johnson also finds himself five off the lead with one round to play, though it was something of a disappointment for Johnson, who stalled on Saturday at even par instead of gaining ground. 2009 Open champion Stewart Cink is at five under, too, while 2009 U.S. Open champion Lucas Glover is four under after a third-round 69.

Rickie Fowler is in the midst of major struggles with his game, but after a solid start the Honda Classic this week, he was inside the cutline and looking to make a move. But Saturday didn’t turn out as he had planned, and it didn’t take long for things to go sideways.

He made three-straight bogeys beginning at the par-5 3rd hole, where an attempt to reach in two backfired. Unfortunately for Rickie, that was just the start. His second shot at the par-4 6th ended up in the water, leading to a double bogey that put him five over through six holes.

Fowler seemed to right the ship at the turn, making back-to-back birdies at 9 and 10. But that was as good as it would get. He made three additional bogeys and another double bogey at 15 to finish with an eight-over 78, dropping him all the way down to T66.