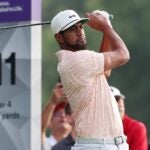 Tony Finau shot an opening 72 at the 3M Open.

The 2021 3M Open at TPC Twin Cities continues with the second round on Friday, July 23. A lengthy delay of nearly two-and-a-half hours prevented the entire field from finishing the opening round, so players with holes left to finish will be out bright and early on Friday. You can find full second round tee times for the tournament at the bottom of this post.

Notable groupings for 3M Open Round 2

Rickie Fowler impressed in his 3M Open debut, going bogey-free to lead the field along with Troy Merritt at seven under par. Fowler will tee it up with Tony Finau and Sergio Garcia at 1:44 p.m. ET.

In his first tournament round since his heartbreak at the Open Championship, Louis Oosthuizen posted a respectable 68 — three under par and four shots behind Fowler and Merritt’s lead. Oosthuizen will play the second round with Bubba Watson and Dustin Johnson just ahead of Fowler’s group at 1:33 pm. ET.

Check out complete second round tee times for the 3M Open below.