2021 3M Open live coverage: How to watch Friday’s second round 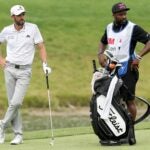 Troy Merritt is a co-leader at the 3M Open after the first round.

Friday marks the continuation of the 2021 3M Open in Minnesota. After a lengthy weather delay on Thursday, not everyone managed to finish the opening round, so the players who didn’t will be out bright and early to complete it before heading straight back out for the second round. Here’s what you need to know to watch the second-round action on TV or online.

Rickie Fowler has been struggling to find his form of late, but got off to a great start in his 3M Open debut on Thursday, posting a seven-under 64, good enough to share the lead with Troy Merritt. Scott Stallings and Adam Schenk are one shot behind, at six under.

Johnson, Oosthuizen and Bubba Watson will start the second round at 1:33 p.m. ET on Friday. Merritt will play alongside Kevin Tway and Greg Chalmers at 1:55 p.m. ET.

How to watch 3M Open Round 2 on TV

How to stream 3M Open Round 2 online