2020 Tour Championship: How to watch the FedEx Cup finale at East Lake 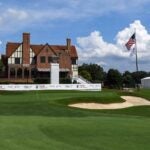 A grandstand-free East Lake is ready for the 2020 Tour Championship.

After a year of competition, the 2019-20 PGA Tour season and FedEx Cup Playoffs come to an end this week with the 2020 Tour Championship at East Lake. Here’s everything you need to know to watch the event.

This week, the Top 30 in the FedEx Cup standings duke it out for all the marbles. How many marbles exactly? A lot. The winner alone will take home a cool $15 million, with the runner-up cashing in for $5 million, nearly twice the winner’s share of any other tournament.

The two players positioned best for those big checks are the same players who faced off in a playoff at last week’s BMW Championship: Dustin Johnson and Jon Rahm. While Rahm prevailed in that playoff, thanks to an incredible 66-foot winning putt, it’s Johnson who holds the No. 1 position in the standings heading into the week. He will start the event at 10 under par, while Rahm will begin two shots back at eight under.

But we’re not ready to hand the Cup to either of those players just yet. Defending FedEx Cup champion Rory McIlroy will tee off with a score of three under, but if he’s on his game, he could definitely mount a serious challenge come Sunday. World No. 3 Justin Thomas will have a better chance, as he’ll only have three shots to make up.

You can find full information about streaming the 2020 Tour Championship online or watching the action on TV below, along with full first round tee times.

With a cable subscription, you can watch all four rounds of the 2020 Tour Championship on TV. Golf Channel will have the action for the first and second rounds, and will also provide early coverage for the final two rounds. Primary coverage of the third and final rounds on Sunday and Monday will be broadcast on NBC. Check out the full TV schedule below.

You can stream the entire 2020 Tour Championship online in various ways. You can catch both the Golf Channel and NBC TV broadcasts online at nbcsports.com/live by logging in with your cable credentials. Another way to catch the action is with PGA Tour Live, which also includes featured group coverage, though you’ll need a subscription to access the stream.