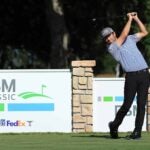 Robert Streb has a two-shot lead at the RSM Classic halfway point.

The 2020 RSM Classic is already at the halfway point. The third round continues on Saturday, November 21, at Sea Island Resort in Georgia. You can find full third round tee times for the tournament at the bottom of this post.

This week marks the second-to-last, full-field PGA Tour event of 2020, and we’re already two rounds in. First round co-leader Camilo Villegas followed up an opening 64 with a second-round 66, but it wasn’t enough to fend off Robert Streb, whose rounds of 65-63 gave him the solo lead at 14-under, two shots clear of Villegas and the rest of the field. The logjam near the top of the leaderboard after Thursday’s round spaced out a bit on Friday with only 10 total players within six shots of the lead, including two-time major winner Zach Johnson (9-under).

Streb’s first Tour victory was at the RSM in 2015. He’s seeking his second career Tour title this week. Villegas has four career wins, but is seeking his first victory since the 2014 Wyndham Championship.

Streb, Villegas and Bronson Burgoon (11-under) will tee off in the final group on Saturday at 11:40 a.m. ET.

Check out the full third round tee times for the 2020 RSM Classic below.