What you missed from Wyndham 3rd round: An, Simpson headline jam-packed leaderboard in regular season finale

Byeong-hun An leads a jam-packed leaderboard at the Wyndham Championship through 54 holes. Here’s what you need to know from Saturday in Greensboro.

Byeong-hun An sits at 17-under through three rounds. He has made 17 birdies and zero bogeys through three rounds. Think about that — zero bogeys! An’s clean scorecard got its toughest test yet at the par-5 15th hole, when he blew his tee shot into the right fescue and then hit a provisional left into a penalty area. But volunteers found his original tee shot, he took an unplayable lie and ended up getting up-and-down from a greenside bunker for a hard-working 5.

An started and ended the day with a one-shot lead. He’s looking for his first-ever PGA Tour win.

Scores are distinctly low at this week’s Wyndham Championship — 9-under is T34, as one example. An’s closest chasers are Webb Simpson and Brice Garnett, each one shot back. Ryan Armour is at 15-under, while Viktor Hovland, Paul Casey and J.T. Poston each sit at 14-under. 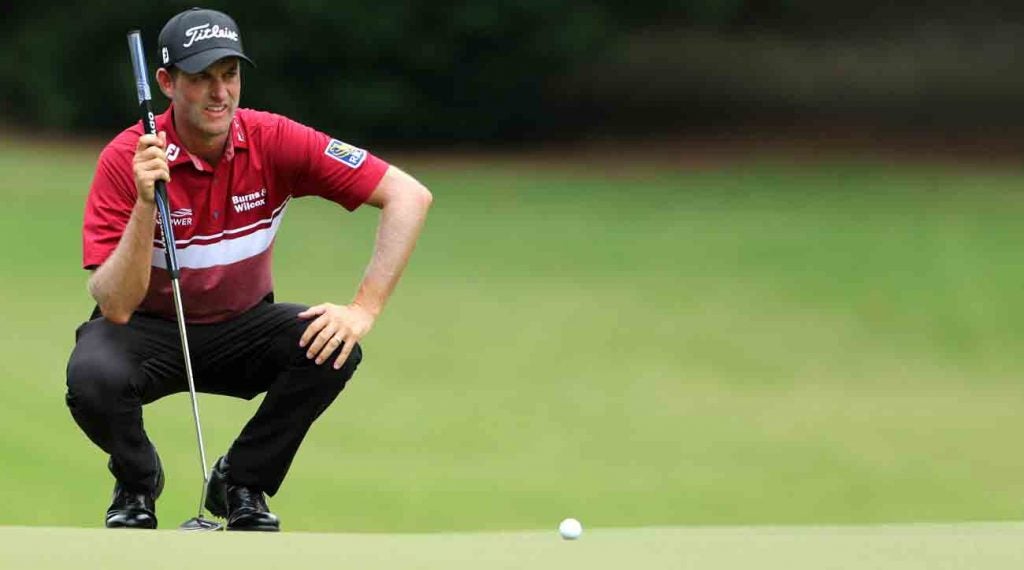 Webb Simpson trails by one shot heading to Sunday's final round at the Wyndham Championship.
Getty Images

Simpson, a past champion at the Wyndham, enters the final round as the betting favorite. Hovland would earn his PGA Tour card for next season with a top-2 finish, and would make the playoffs with an outright win.

Viktor Hovland wraps up his 6️⃣4️⃣ in style.

On Thursday, Jordan Spieth shot his lowest round of the season. On Friday, he backed it up with a 67 to find himself in contention. Saturday was a distinctly different day. Spieth struggled to a 77, the highest score by any player all week, and missed the secondary cut after dropping 66 spots on the leaderboard.

Credit to Spieth for talking after the round. “I putted my ass off to be where I was through two rounds, and you can’t fix ball-striking in a day.”

Tough to top An’s perfect roll from 51’6 to reclaim the tournament lead — give it a watch:

Longest putt of the PGA TOUR season: 51’ 6”. 👏@ByeongHunAn reclaims the lead by ONE @WyndhamChamp.

PITCH OF THE DAY

⚾️ @JTeater12 with the heater.

Teaters threw out the first pitch before Monday's @GSOHoppers game.

How would you rate his pitch? pic.twitter.com/xh2stPvM9D