Inclement weather rolled in Thursday afternoon, cutting short the first round at the Sanderson Farms Championship. But the morning wave yielded a day’s worth of low scores. Here’s what you need to know from Day 1 at the Country Club of Jackson:

Tom Hoge, who finished runner-up to Joaquin Niemann at last week’s Greenbrier Classic, hardly skipped a beat. He came out of the gates hot with birdies on the first three holes and posted a bogey-free round 0f 8-under 64.

“I’ve just been playing a lot of golf tournaments. Kind of feel like I’m just kind of in that tournament groove right now,” Hoge said. Sounds simple enough, right? “The greens are perfect, really. If you hit it within 15 feet you have a great chance to make all the putts.” 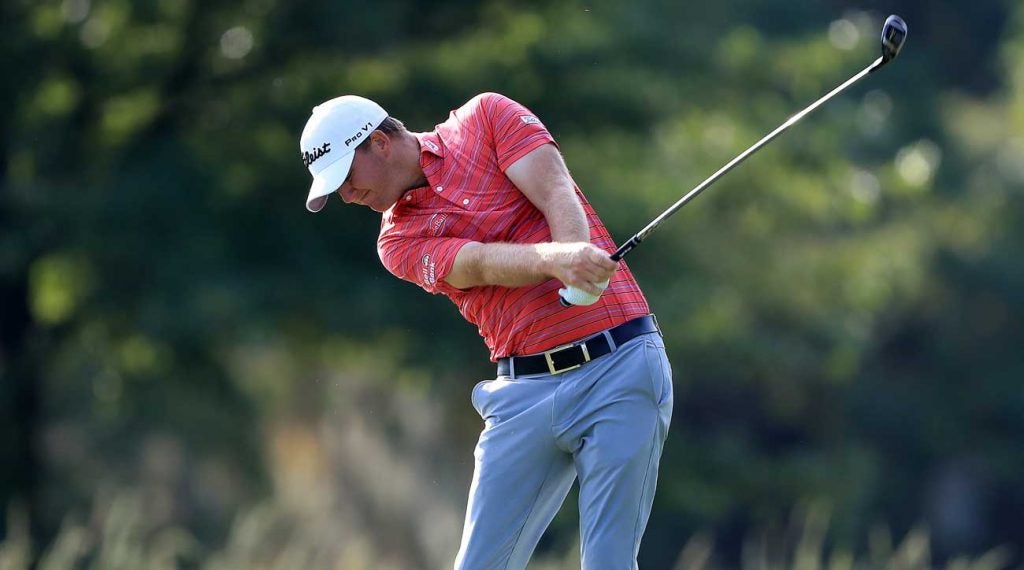 Despite only completing about two-thirds of the day’s planned action, there was no lack of birdies at the Sanderson Farms. Irishman Seamus Power was six-under through six holes; he made seven birdies and an eagle en route to a first-round 65. Cameron Percy made eight birdies and Robert Streb made seven; each joined Power with opening 65s.

Power wasn’t getting ahead of himself. “It’s a nice start, but you know, it’s only a start. You’re going to have to get to 20-under,” he said. Six more players were T5 at five under par.

That would be Bill Haas. Even though the guy has played only eight holes in his first round, Haas notched four birdies — and has the pins at the CC of Jackson officially on notice. First came his tee shot at the par-3 4th hole, which could have easily gone in were it not for a firm flagstick.

The flagstick is not @BHaasGolf's friend here.

Just two holes later, Haas hit his approach shot at the par-4 6th hole into the left greenside bunker. No worries. From there he didn’t even give the flagstick a chance to keep his ball out of the hole, hitting one with perfect dead weight that rolled in the center.

Play was suspended at 2:46 p.m. CT due to inclement weather, and players were brought into the clubhouse at that point. Officials were initially hopeful that they’d be able to resume play, but by around 6 p.m. they’d called it for the rest of the day.

Due to lingering storms in the area, R1 of @Sanderson_Champ has been called for the day and will resume at 7 a.m. Friday. @PGATOUR

Play will resume at 7 a.m. Friday morning. That means plenty of golf for Thursday’s afternoon wave; the final groups of the day completed just two holes.