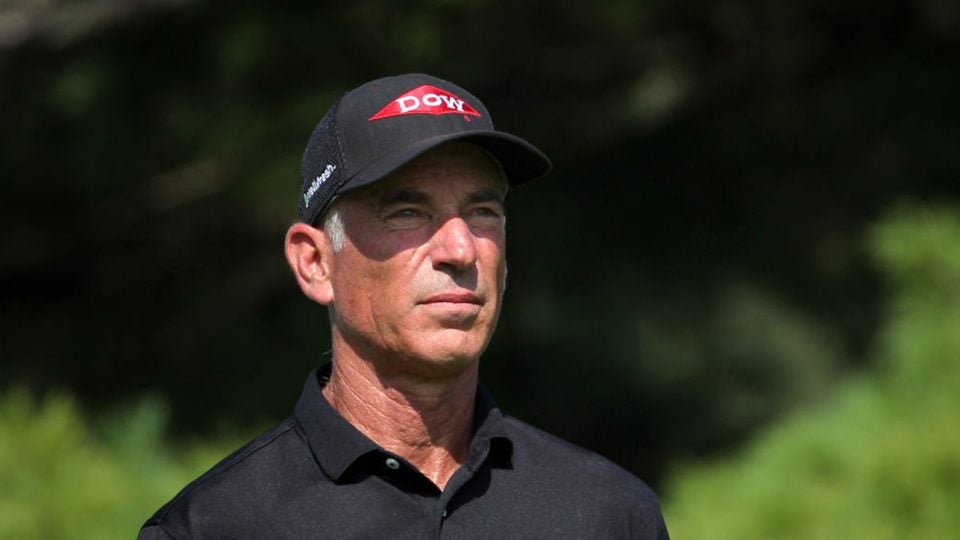 Cory Pavin almost lost his chance to move on in the Champions Tour playoffs after being assessed a penalty for slow play.
Amy Lemus/NurPhoto via Getty Images

At long last, slow play actually led to a penalty for a professional golfer this weekend.

Corey Pavin was handed a one-stroke penalty for slow play after Sunday’s final round of the Dominion Energy Charity Classic, a PGA Tour Champions event, in Richmond, Virginia. Pavin was reportedly informed by a tournament official that his final score would drop from an even-par 72 to a one-over 73 due to the penalty. As a result, the 1995 U.S. Open champion finished in a tie for 15th at the event.

Fortunately for the 59-year-old Pavin, the one-stroke penalty could have been more costly. The Dominion Energy Charity Classic is the first of the three-event Charles Schwab Cup playoffs. The top 54 in Schwab Cup points qualify to play at the Invesco QQQ Championship this week. Pavin made the cut just by a hair. After being on the bubble for much of the tournament, he finished the event ranked 53rd in Schwab Cup points to advance to the Invesco at Sherwood Country Club in Thousand Oaks, California. Another stroke worse and his season could have been finished.

Slow play is often a hot-button topic in professional golf, rearing its head during pressure-packed tournament play. Last year, J.B. Holmes took about four minutes to hit a lay-up shot at the Farmers Insurance Open during the final round. Holmes was in the final pairing at the time, but was ridiculed for how long he took to play his shot.

Despite instances like Holmes, penalties have rarely, if ever, been doled out for pace of play issues. Youngster Tianlang Guan was handed a penalty at the 2013 Masters — he went on to make the cut — but he was merely an amateur at the time.  The two-man team of Miguel Angel Carballo and Brian Campbell were assessed the first slow play penalty in more than two decades last season at the Zurich Classic. But still, it was not a single-player penalty.

Though it didn’t come on the PGA Tour, perhaps Pavin’s penalty is a look at what could happen soon.