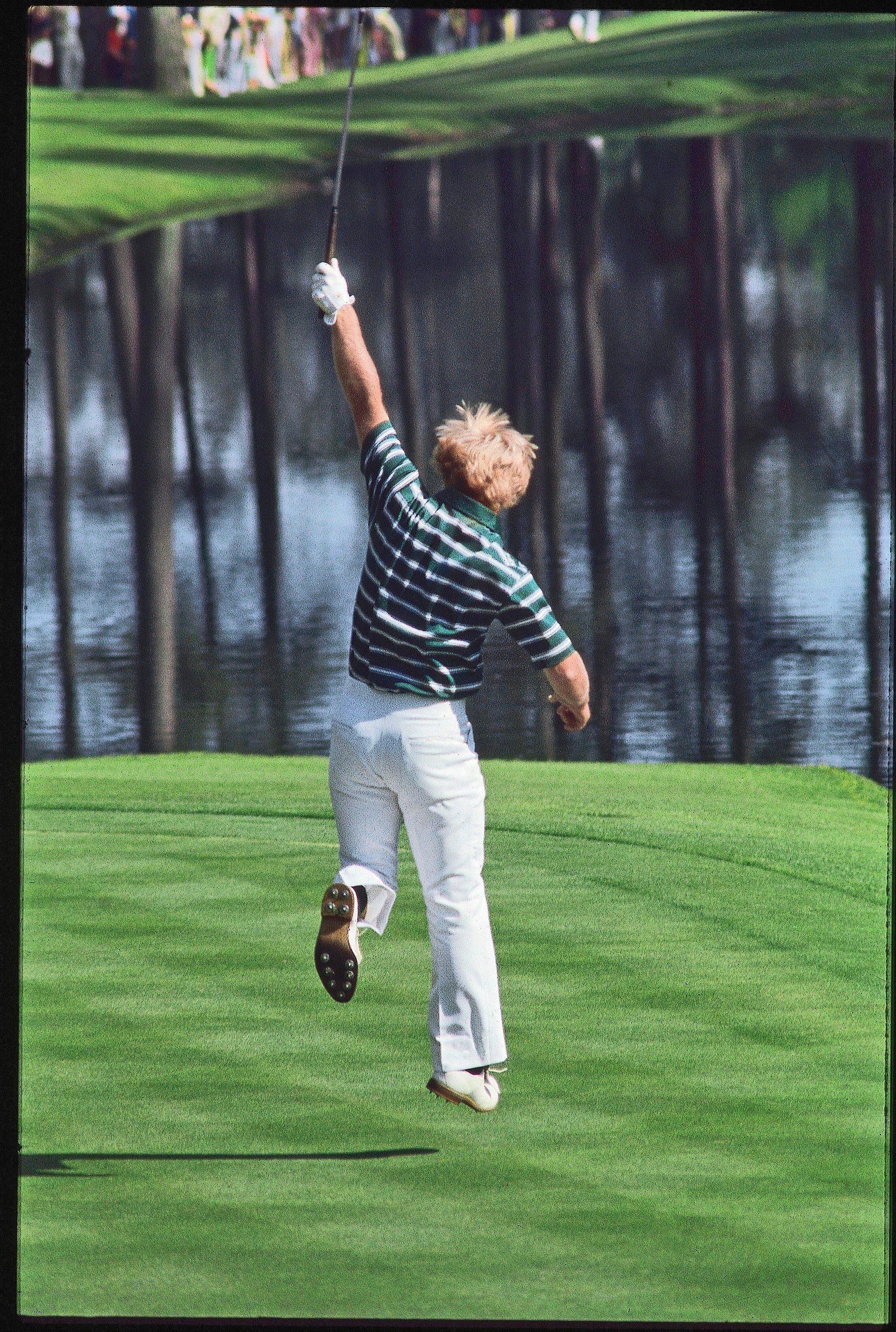 Nicklaus celebrated his unlikely birdie at 16, and the rest is history.
Stephen Green Armytage / SI

Forty years ago, Vin Scully opened the Sunday afternoon Masters telecast for CBS with words that sounded like typical network hype but instead proved prophetic.

Wait a minute, you’re thinking. Legendary baseball announcer Vin Scully did golf too? Yes, in his spare time, and like baseball, he did it legendarily.

“The Augusta National Golf Club has seen some marvelous finishing rounds,” Scully intoned at the broadcast’s start, “and this fourth and final round of the 1975 Masters might very well be a story that will live for many years to come.”

Do you still call it hype if it comes true? Maybe not. Either way, Scully nailed it. The 1975 Masters was something special in a year better remembered for events such as the end of the Vietnam War and the debut of Saturday Night Live.

It was a Masters that packed an emotional punch. The only modern Masters I would rank ahead of the 1975 edition would be 1986, when Jack Nicklaus made an unthinkable charge to his sixth green jacket.

In ’75, Johnny Miller made a ridiculous weekend charge, Tom Weiskopf led going into the final round and, of course, Nicklaus was there like the Rock of Gibraltar. There had never been a three-way shootout like this, with a trio of the game’s most glamorous players.

Miller was the blond upstart trying to take Jack’s crown. Weiskopf was a languid-swinging, ballstriking artist from Ohio who was therefore always — and unfairly — compared to Jack. And Nicklaus, after a makeover at the start of the decade, was in the prime of his Golden Bear era and playing his best golf with a warm smile and movie-star looks.

You could write a book about this tournament and luckily, someone finally did. Gil Capps wrote The Magnificent Masters, which came out last year and is now being rereleased in soft cover to commemorate the event’s 40th anniversary.

It’s a terrific book because it brings a wonderful event back to life. It has a thrilling, one-of-a-kind finish; a behind-the-scenes look at three superstars with tales you’ve never heard, such as a young Miller losing a brother to a rogue wave and undertow; and a clubhouse full of other important tales, especially Lee Elder’s appearance as the first black golfer to play in a Masters.

Elder, who gamely competed under remarkable pressure, missed the cut. His departure left an indelible mark, and Capps described the scene in which black members of the club’s grounds crew and kitchen staff applauded Elder on his way out.

I can’t prove it with any analytic data, but I think the ’75 Masters was when the tournament became the biggest major of them all. If you watched this Masters, you never wanted to miss another. Televised golf seemed to come of age that week as CBS combined its usual exquisite camera work with great storytelling, thanks to its commentators.

I still recall some of their calls. When Weiskopf birdied the 15th, the usual roar echoed through the pines, prompting Ben Wright to note, “That will be evil music in Nicklaus’s ears.”

A few minutes later, Nicklaus played the stroke of genius we all remember, holing that 40-foot putt at the 16th and then, in an uncharacteristic display of emotion, dashing across the green in celebration, putter still held upright. Weiskopf was watching from the tee box, and CBS captured every last drop of the drama.

Even the staid, normally droll British commentator Henry Longhurst felt his pulse racing, telling viewers, “That may be the greatest putt I have ever seen in my life. And now Weiskopf will have to take it just as he dished it out before.”

The U.S. Open, or National Open as players used to refer to it, had long been the biggest tournament for the players. But this Masters may have changed that. Opens were often par-fests and survival tests that had all the drama of assembly-line work. This Masters had eagles and birdies and heroic recoveries and blond gods playing on what CBS made look like the Elysian Fields.

After 1975, Masters tickets got a lot harder to come by and the event morphed into the grandest of the four majors. Nicklaus had fueled that fire in the first place by focusing on golf’s majors and effectively introducing that concept to the public.

Looking back, the 1975 Masters elevated Augusta National to a higher level and probably all of golf along with it. You can wade into the nostalgia in The Magnificent Masters because Capps makes you want to live there.

Vin Scully didn’t just call that Masters for CBS, he called his shot. It was a Masters to remember, and the book has it right: It was magnificent.