Come for the golf. Stay for all the other goodies. At our Top 100 Resorts, the pleasures don’t end on the 18th hole. With so much to do at these standout properties, and only so much time to do it, we’ve narrowed down a list of 13 of our favorite non-golf amenities.

THE VIP WHALE WATCHING LOUNGE IN THE TOWERS AT PACIFICA

A lot of whale watching is really whale waiting. But what a place to wait: a luxurious lounge, with expansive water views, that offers breakfast, lunch and dinner, all-day snacks, and self-service beer and wine. There’s a giant flat-screen TV for added entertainment, and an outdoor deck for sunbathing and staring on in wonder as pods of humpbacks migrate by.

True to its name, the Bunker Bar is an underground retreat designed for hunkering down after your round. By hunkering down we mean hanging out in hide-bound chairs, shooting pool and playing dice, watching sports, sipping whiskey and shooting the breeze, with the option of admiring the photos on the wall, each of which depicts a bunker from a Bandon course.

CLICK HERE TO BROWSE ALL OF OUR TOP RESORTS

From the edge of this free-form infinity pool, the views seem to go on forever. But you don’t have to look far for other perks. A large hot tub is just paces away, and pool attendants are right nearby, ready with towels and cooling facial spray. At the far end of the Nuna, there’s a shallow splashing area for kids. But ignore those rascals. Order margarita and watch the sun set over the Riviera Nayarit. 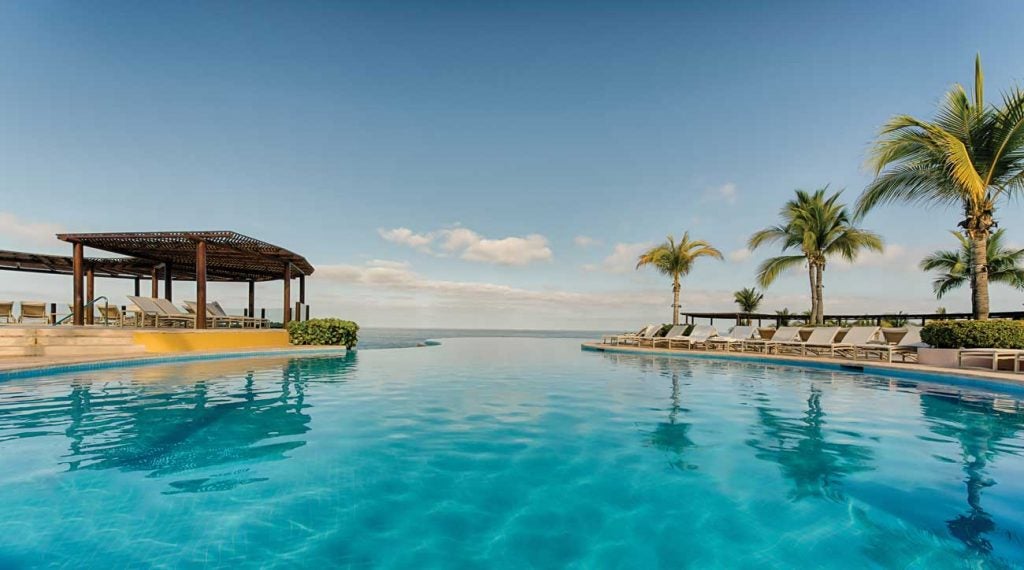 The infinity pool stops right on the edge of the ocean.
Courtesy

The dress codes are tidy, the customs are prim and the turf conditions are absolutely perfect. But never mind the doings on the nine golf courses. The other signature sport at Pinehurst is croquet, and there are two sweet courts where you can play it. As athletic outlets, it’s terrific, low-key fun, but it can get as cutthroat as you want it to be.

For the rightful hoopla about the golf, Sand Valley is also home to the largest public grass tennis surface in the United States, with 15 courts, five planted to fescue and 10 to ryegrass. Wimbledon whites are optional, but soft-soled shoes are required, and hiring a ball boy or girl is highly recommended.

Bison and bears and wolves, oh my! You’re also likely to see bighorn sheep on naturalist-led outings to Grand Tetons National Park, an “amenity” as grand as any, just a short skip from the resort. 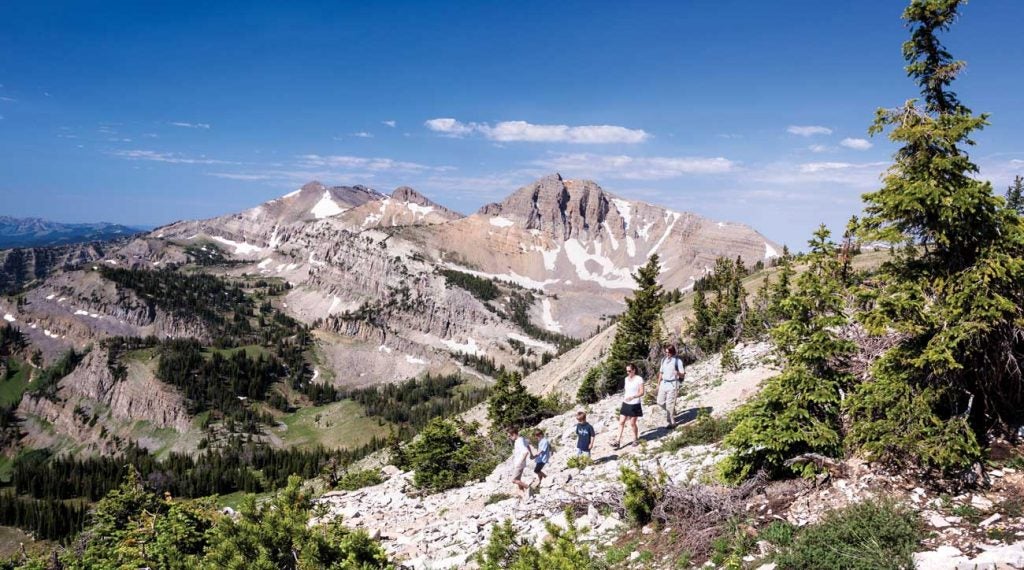 Just minutes from the resort but world removed, this three-level, 2,000-square-foot ‘cabin’ is a rustic-chic retreat, available for rent as your private getaway. Built with reclaimed timber from Wisconsin farms, and tricked out with all manner of contemporary comforts, it fits the bill for everything from buddy trips to romantic escapes.

For years, you’ve been trying to stop casting. But that’s only good if you want a better golf swing. You’re going to need to learn to cast if you want to catch some trout. At Forest Dunes, they’ve got you covered, with private lessons, right there at the resort. A fly-fishing expert will come to you, supplying all the gear and covering all the basic in a two-hour session that costs $45 per person (there’s a two person minimum). Think of it as getting river-ready, in the same way a lesson on the range gets you ready for the course.

Five hours is a long time to spend on a golf course. But it goes by in an eye-blink when you’re floating on an inner tube down a river. In this case, the Niobrara River, a tributary of the Missouri River that cuts a pristine path through the Nebraska Sandhills, providing boundless prairie vistas along the way.

Picture the world’s most soothing rain shower, except that the water flows from multiple showerheads. Also: you’re not standing. You’re lying down, relaxed, on a comfortable massage bed with built-in drainage. The water is warm, pulsing, rhythmic, and can be manipulated by a therapist to give you a more focused aquatic massage. This is a Vichy shower. It’s available in the spa at Cordevalle, and it’s every bit as indulgent as it sounds.

Canada’s version of a Rocky Mountain high, the Banff gondola is an exhilarating ride to the summit of Sulphur Mountain, where the panoramic takes in six mountain ranges and the full expanse of the Bow Valley below. Go at just after daybreak, and you’re bound to love. Go at sunset, and you’ll love it even more.

Once upon a time, on Pawleys Island, a place of screened-in porches and grand oaks dripping with Spanish moss, there lived a skilled pit-master named George Young. When he wasn’t smoking meats at his own barbecue joint, Young worked a side-gig in the kitchen at Caledonia Golf & Fish Club, where his peppery fish chowder was a signature dish. Young died in 2007, but his fish chowder recipe endures. Savory and deeply satisfying, it’s made fresh every day at Caledonia, and ladled out for free from a cast-iron pot outside a tattered shack near the 10th tee. A hot dog at the turn just can’t compare.

Two Robert Trent Jones courses are at your disposal, but when the golf becomes too much, the beach is a perfect place to take some relief. And if the wind is what pushed you away from the course, use it to your advantage with kite sailing. There is no feeling quite like getting some air under you as you soar above the Atlantic Ocean.

There are many paths to inner peace. One of them leads through the Wellness Teepee, a pointy-topped retreat in at this high-desert resort that’s akin to a deeply spiritual spa. Along with yoga classes and meditation sessions, experiences here include clinical herbal tastings and crystal guidance workshops. Still feeling stressed? Elsewhere at Pronghorn, you can get a massage. 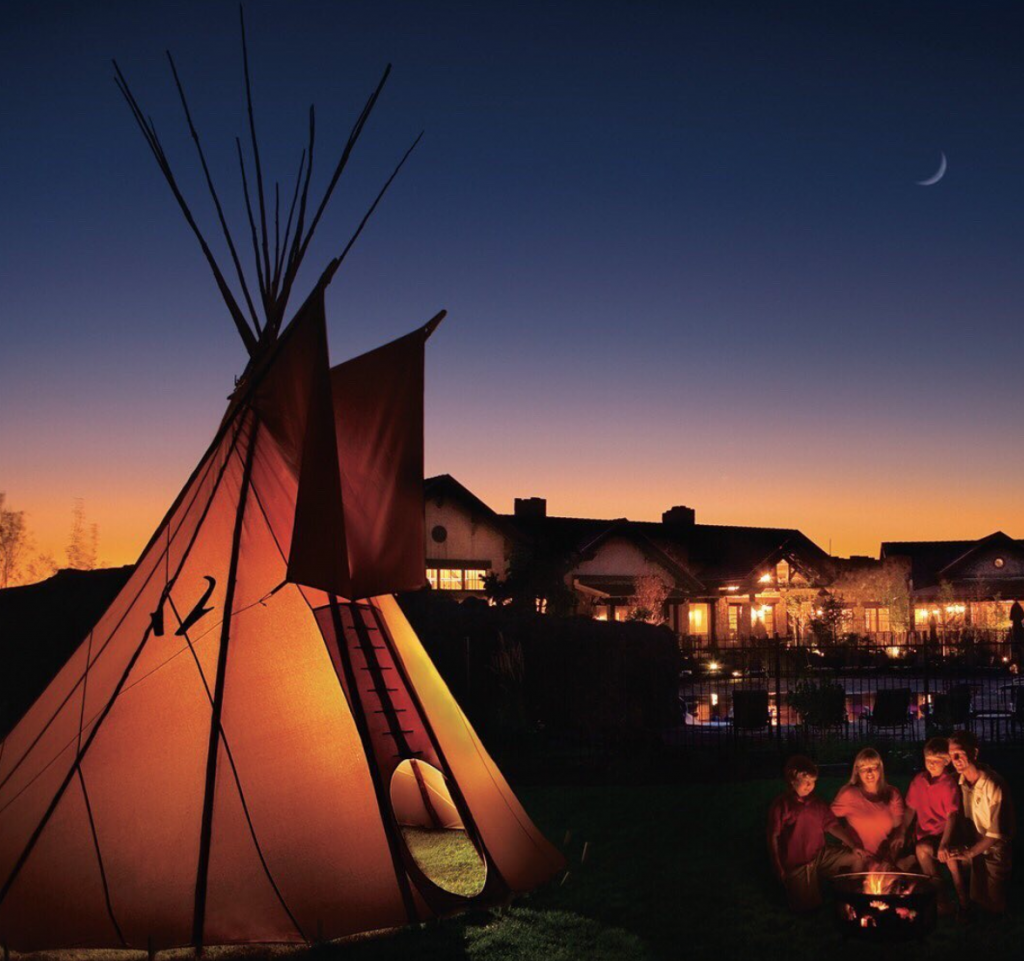