Players Championship sleeper picks to watch: Here’s who might break out 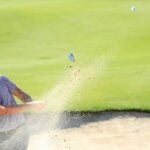 Victor Perez hits a shot out of a bunker during the Saudi International earlier this year.

Victor Perez won the 2019 Alfred Dunhill Links Championship, has had eight top 10s since the middle of 2019 and missed just two cuts last year on the European Tour. He’s the 36th-ranked player on the planet. Perez even followed up a sextuple-bogey 11 last week at the Arnold Palmer Invitational — with a birdie 2.

Hail to the Victor, indeed.

The Players, with 48 of the world’s top 50 players, has one of the deepest fields of the year. This can be good for the gambler. Players like Perez, Bernd Wiesberger (41st in the world) and Robert McIntyre (42nd) are sitting at small-investment-and-big-return value — each is going off at 300-1 or higher — even though they are quite talented. They’re not sleepers in a golf sense, but are very much so this week in the betting world.

You should take advantage. We’re here to help. Eleven members of our staff have picked a player who’s receiving odds of 125-1 or greater using odds from the DraftKings website. Our primary goal, of course, is to help you with your own weekly picks, whether those are for a low-stakes office fantasy league, or (legal!) big-bucks bets with a sportsbook. Or for the new Chirp Golf app from GOLF’s parent company, 8AM Golf (available in the App Store and at Google Play), which allows users to place live bets using fake money to win real-life prizes.

Sleeper pick: Branden Grace, +22,500. Five or six years ago, Grace seemed destined to be the next great South African major winner, notching five top-six finishes in nine major starts from 2015-17. That hasn’t panned out (yet), but Grace has begun to show signs of his old self, winning in Puerto Rico a couple of weeks ago. And that wasn’t a one-off: He also played well at Pebble (34th), Riv (20th) and last week at Bay Hill (26th). No reason to believe that good form won’t continue at Sawgrass.

Sleeper pick: Ian Poulter, +15,000. Poulter has been solid for the past year. Nothing fantastic, nothing terrible and a ton of respectable finishes around the top 35 or so. He’s made a dozen career starts at the Players and missed only two cuts while finishing second twice. If you need a dark horse, you could do much worse than Poulter.

Sleeper pick: Shane Lowry, +20,000. Always fun to get a major championship winner for +20,000 on tournament week. Lowry is by no means a lock to stick in contention, but I’d gladly take him above some of the other choices at these odds.

Sleeper pick: Maverick McNealy, +20,000. McNealy has the talent to get the job done. I’ll take a flier on a young kid full of potential at those odds any day.

Sleeper pick: Branden Grace, +22,500. A win two weeks ago in Puerto Rico. A respectable showing this week at a blustery Bay Hill. A course that accommodates his pea-shooter style of play. Tell me why this one isn’t worth a flyer? You can’t.

Sleeper pick: Stewart Cink, +50,000. He’s second on Tour in greens in regulation percentage and a sneaky 33rd in driving distance. I’m hoping he makes a veteran run like Furyk in 2019.

Sleeper pick: Marc Leishman, +12,500. Going on a hunch that Leishman gets it back on track this week.

Sleeper pick: Wyndham Clark, +30,000. The man has some seriously long odds here, but recently top 10’d it in L.A. Hard to hate a solid player on a tough course with mega odds.