Money Game Mailbag: How to insure your charity golf outing against inclement weather 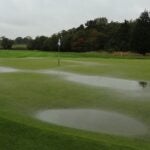 Here's what you should know about insuring your charity event in case a rainy afternoon ruins your day on the links.

Editor’s note: Welcome to the Money Game Mailbag, where we field all of your burning questions at the intersection of golf and, you guessed it, money! Have a query for us — on your personal (golf) finances, the economics of golf, or if jumbo winner’s checks are actually cashable — and our resident golf-and-finance whiz, Paul Sullivan, might just answer it in an upcoming column. Email your queries to him at moneymailbag@golf.com.

Last year we had a charity golf outing, followed by dinner and an auction. Unfortunately, we were forced to cancel the event due to rain. Our fundraising was minimal compared to what we had anticipated, which was very disappointing. Is there a way to insure our charitable proceeds lost due to rain? — Richard Hoag

I’m a sucker for a charity event at a nice course. Golf plus a good cause — what could be better? But unless you’re Bishop Pickering, having the round of your life in a lashing rain, who wants to play when the heavy stuff is coming down?

So the question is well put: What does rain mean for the charity? If there’s no event, there’s no money raised, or at least a lot less. And even if the event happens in playable rain, how many of us feel like our most generous selves sitting at a dinner auction in wet clothes?

Insuring that a charity recoups some or all of the money it would have made had the sun been out is actually fairly easy — and not crazy expensive.

With what’s called parametric weather insurance — which is different from event-risk insurance — a charity event can buy coverage for a certain amount of rain fall that would cause its tournament to be canceled or curtailed. If that amount of rain falls during the hours the event bought the coverage, then the charity gets paid.

Prices vary, of course. Rain insurance in Scottsdale is a lot cheaper than in Seattle. But that’s no different than any insurance pricing. (Think of those safe driver credits.)

There are some caveats. First off, you can’t call up the day before and get coverage when the forecast looks bad. Anderson said you have to buy the insurance 15 days before the event.

And coverage only counts for the hours you buy it for. So if it pours overnight and the course is unplayable but it’s not raining during the hours when the event was scheduled, then you wouldn’t get paid.

Same thing applies to the auction at the end. The rain could hold off but then soak the players on the last few holes. If they head for their cars, money not raised at the dinner auction is only covered if those hours were purchased under the insurance policy.

But you can also get paid for the rain and have your event too. “If it hits .33 inches and the course drains well, it’s the best of both worlds,” Anderson said. “You collect on the insurance and the superintendent says cart path only.”

As for who measures the rain, that’s up to the National Oceanic and Atmospheric Agency, which is responsible for official national numbers. “They keep the weather,” Anderson said. “There’s no bias.” And the check, he said, arrives in two weeks.

In a year where the coronavirus has caused the cancelation of many spring fundraisers, golf events could play a bigger role in fundraising — weather permitting.