How golf course tactics helped me fix my disaster lawn

Watering, mowing, and fertilizing when appropriate is the crucial formula.

I usually reserve these columns to write about things that will make you a smarter golfer. We’ll return to regularly scheduled programming on Monday. But today, we’re going to shift gears momentarily to learn how being a smarter golfer can make you a better lawn-haver.

When I first moved in, my lawn was in pretty dire straits. It was patchy in the best of spots, non-existent in the worst, and mostly covered by moss.

I snapped that picture on March 23rd 2021. Here’s what my same lawn looks like on March 25th, 2022, a comparably sunny day. And no, I didn’t use any filters on this picture, if you were wondering. You don’t have to believe me if you don’t want, but it’s true.

In service and celebration of a lawn turnaround that rivals Nick Faldo’s six-major swing change in terms of its impact on my life, here’s how it happened.

I first got my hands on the lawn in late March, which gave me just enough time for a spring aeration.

The first aeration I did myself, using one of those hand core aerators you can buy for under $50. It was honest work, but absolutely painstaking that took hours. I resolved that day to never again complain about aeration making a course bumpy.

The next two times, I hired someone who came around in one of those fancy machines and did it all in about 10 minutes.

Most people will say you really only need to do aeration once a year, in the fall, and they’re not wrong. But my lawn was in such rough shape to begin with I went with spring and fall aeration. It’s a vital step because it allows air, water and other nutrients to get down deeper into the earth while preventing the soil from getting compact.

Because my lawn was pretty thin, I complimented the first aeration with a topdress — which is when you add a layer of soil over the entire area. I arranged with my local garden center to buy enough dirt to cover the lawn in 0.25″ of topsoil. Then one day a man in a big truck drove by, dumped a bunch of it in my lawn, then drove away.

Golf courses use sand when they top dress because they need something that’s going to drain the large amounts of water they pour on it. You can also use compost, which will improve the quality of your soil and won’t raise the grade of your lawn, but that’s also more expensive. I used ordinary topsoil the first time and it turned out great. After the next two aerations, I just broke up the cores and used those.

You really can’t overstate how important picking the right grass is. A warm weather grass, like Bermuda, just won’t be able to survive up in the Northeast where I am, while a fescue or perennial ryegrass may burn off instantly down south (unless you apply an inordinate amount of water on it). Some grasses prefer shade; others sun. Some can tolerate high traffic and others need less.

I used this mix of northeastern grasses and eventually noticed that the different varieties of grasses would thrive in various spots around the lawn where they were best suited. There are various formulas floating around about how much you should apply. I tried those at first, but found basically the more seed you throw down, the better.

Also, random fun fact for golfers: Bentgrass, despite its popularity on golf courses, is not a grass that’s used in lawns because of how shallow the roots are. 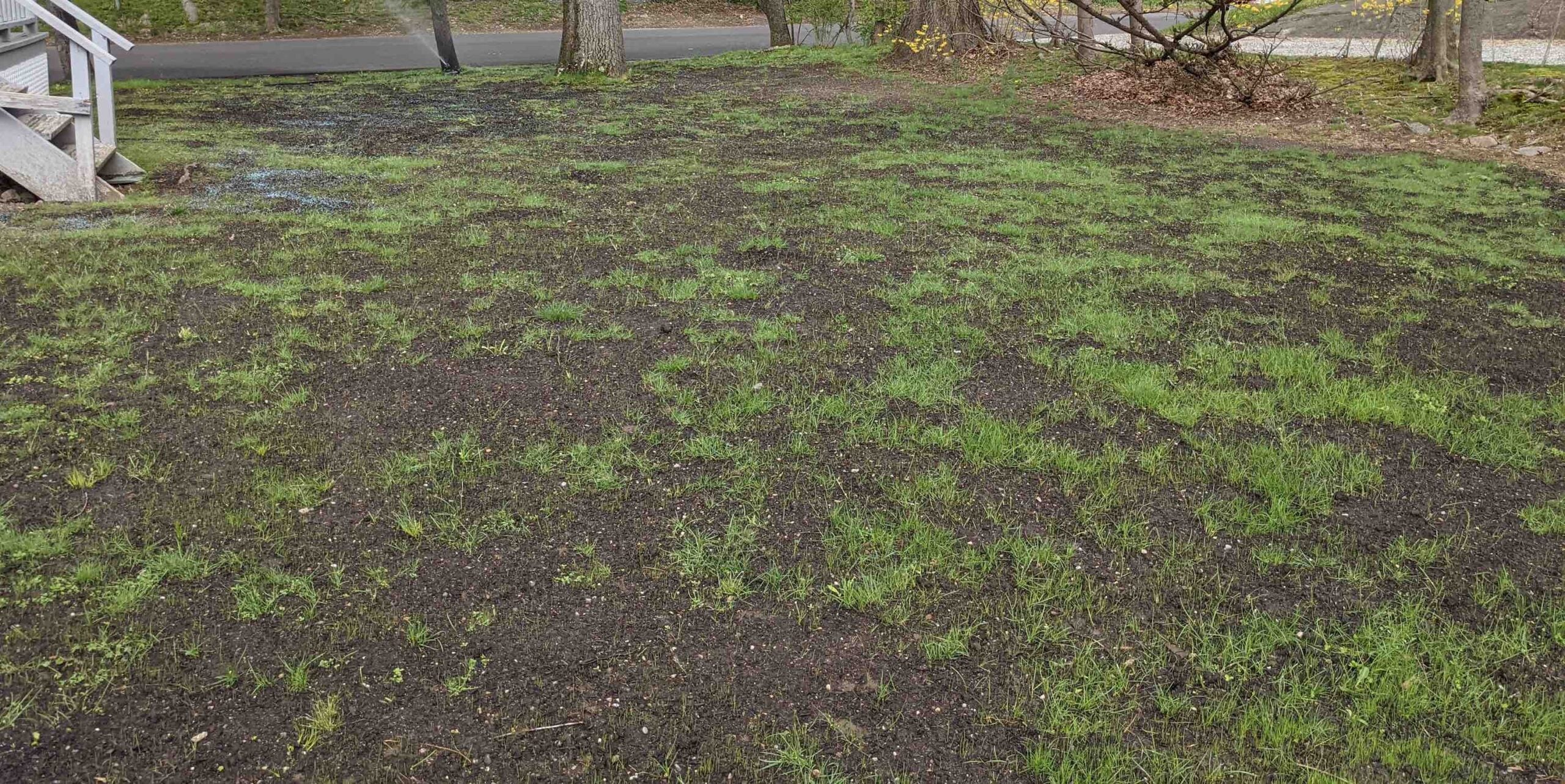 The good news is that once a lawn is established, it won’t need as much water in most areas. But new lawns require a lot of water to get going — there’s no way around it. New seed will just sort of sit there until it gets enough of it, and once it starts germinating, the young grass will burn off quickly if it doesn’t get enough.

When my lawn was a dirt patch with some green spots, I was on a twice-per-day watering schedule (except when it rained, obviously). It’s important to water in the morning and evening, before and after the sun is in the sky. Otherwise, the water will evaporate before it has any time to be useful.

Maybe you’re out there reading this with a lawn success story that didn’t require any chemicals. That’s great! This is not one of those stories.

I put starter fertilizer when I first putt the grass seed down, pre-emergent once it was established to prevent crabgrass, then a couple of in-season fertilizers to keep the grass juicy. In the fall, I hired a company to take over the fertilizing, who started winterizing the lawn and spraying the various weeds.

Unlike grass, this is one area where you do need to follow the formula for how much to apply pretty rigorously, otherwise you’ll burn the grass and undo all your hard work. 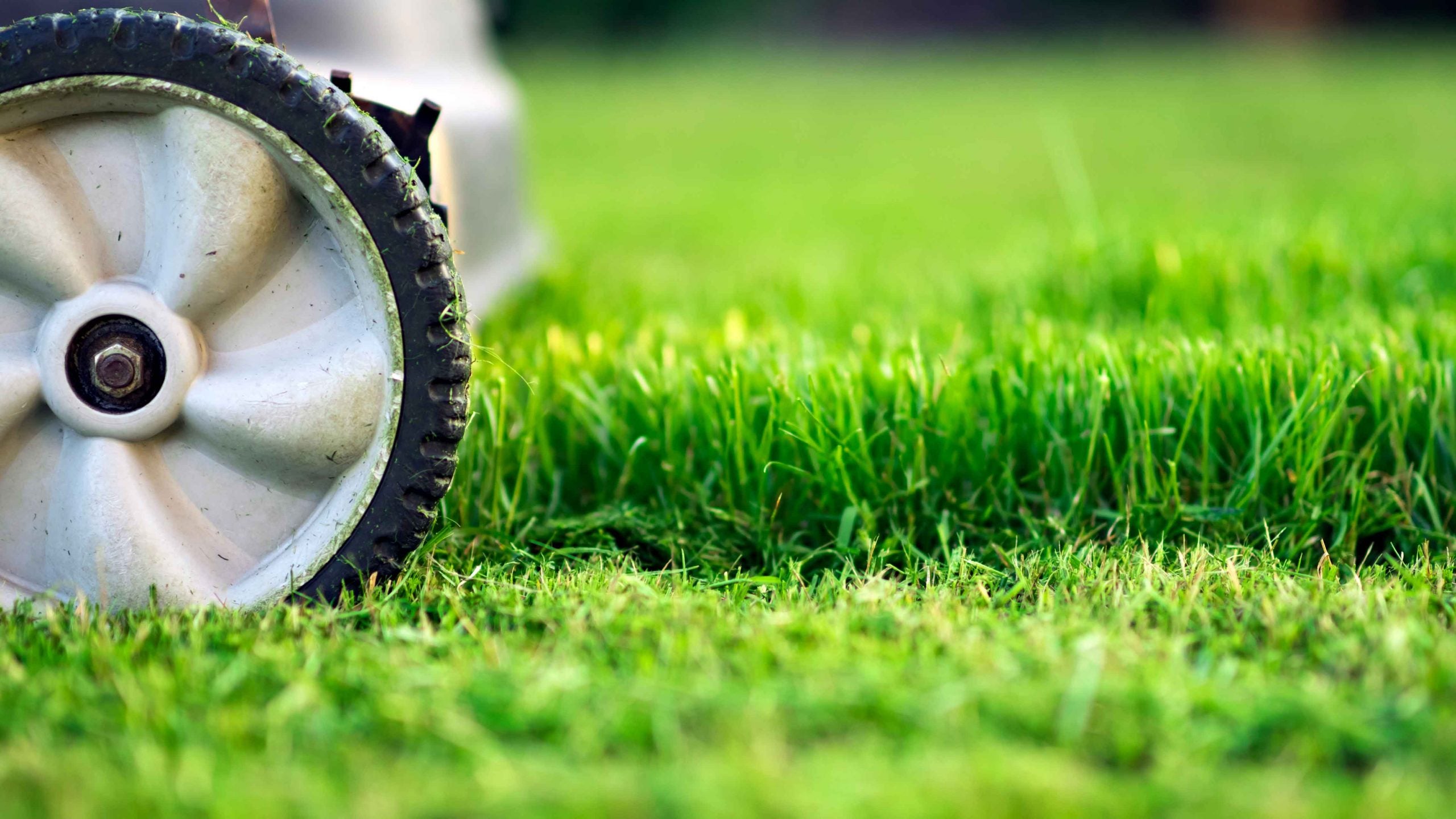 When you mow your grass, it stimulates the growth of your lawn by encouraging the grass to repopulate. For the most part, the more you cut, the faster it’ll grow. Just make sure to avoid these two things:

First, don’t cut more than a third of the overall length of the grass off at one time, otherwise you could kill the grass.

Also, I made the mistake of cutting the grass too short in one sun-exposed area, which stressed it out and almost killed it.

That, really, is the formula. Watering, mowing, and fertilizing when appropriate. Touch up the bare spots with the extra seeding along the way, and try to nix those weeds as soon as you spot them.

As for one other thing you can do: Talk to people about it! Not about your lawn, specifically, but don’t be afraid to ask questions about theirs. I formed a little bond with noted lawn enthusiast Marc Leishman during my journey, who keeps giving me a bunch of great advice. It’s amazing how much you’ll learn about it all simply by picking up knowledge as you go.

That, plus a bit of patience and persistence, and your lawn will be moving in the right direction in no time.