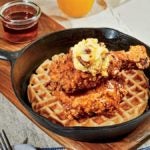 While food historians may not all agree, the captivating combination of fried chicken and waffles quite likely originated at Wells Supper Club in 1930s Harlem. Legend has it jazz musicians rolling in after work during the wee hours craved something that offered part dinner, part breakfast. A comfort classic was born.

Over the decades, the dish has taken on a life of its own (as anyone who has been to Roscoe’s House of Chicken and Waffles in Los Angeles will tell you).

According to executive chef Brian Sundeen, the dish’s deliciousness starts with the chicken, which is marinated overnight in a mixture of buttermilk, garlic and hot pepper to achieve maximum tenderness and flavor infusion. Then it’s coated with a blend of 18 spices, fried up crispy and lovingly stacked atop a from-scratch Belgian waffle.

The combo is finished with house-made, maple-pecan butter and bourbon maple syrup. The adventurous among you may even opt for Cibolo Moon’s candied jalapeño garnish. That should jazz things up.

WGC-FedEx St. Jude picks to win: Who the experts and a gambler are betting on

The dos and don'ts of buying a golf course, according to experts

The smart way to bet $1,000 on the WGC-FedEx St. Jude, according to an expert