The faces of CBS golf coverage have it pretty good off-air, as they showed in a video posted on Thursday afternoon.

The video is taken from Nantz’s Pebble Beach home, and the short par-3 Faldo is hitting on is modeled after Pebble Beach’s famous 7th hole. 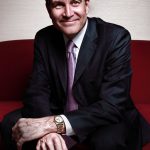 “Wouldn’t that be nice to be able to put your name on the wall…on the Pebble Beach Pebble…on the Pebble Beach Boulder,” Nantz says as Faldo fires at the pin below. It’s clear he’s still workshopping some of the commentary, but the rock he’s referring to displays the names of those who have holed out on the hole, including Brandt Snedeker (pay close attention and you’ll see his name spelled incorrectly), David Feherty, and Nantz’s new NFL broadcast partner, Tony Romo.

It’s a mesmerizing video, some combination of Nantz’s familiar voice, the soothing Masters piano, and Faldo’s grin as he takes aim in the long shadows of a Monterey evening. It’s no wonder they’re ready to break into song by the end of the clip: life looks smooth and easy at the Nantz residence. Check it out:

#HelloFriends just another day in my life with #JimNantz — we travel with a soundtrack of course pic.twitter.com/OC85UcL0Vp