U.S. Open 2019: Jim Nantz made his Pebble Beach prediction back in January

Jim Nantz knows Pebble Beach Golf Links as well as anyone. In fact, he’s a resident of Pebble Beach.

However, he won’t be on the call for the 2019 U.S. Open this week because Fox Sports, not CBS Sports, has the broadcast rights to the third major of the golf season. But that doesn’t mean Nantz didn’t have a prediction for who would win this year’s national championship.

The sports broadcaster actually made his pick back in January! Before calling Super Bowl LIII between the New England Patriots and Los Angeles Rams in Atlanta, Nantz made an appearance at the PGA Merchandise Show in Orlando. During an interview with Golf Channel, Nantz was asked who he thought most intrigued him on Tour this year.

One of the names Nantz mentioned was Phil Mickelson, who has never won a U.S. Open before. But Nantz doubled down and explained why he thought Lefty would win at Pebble Beach this June. 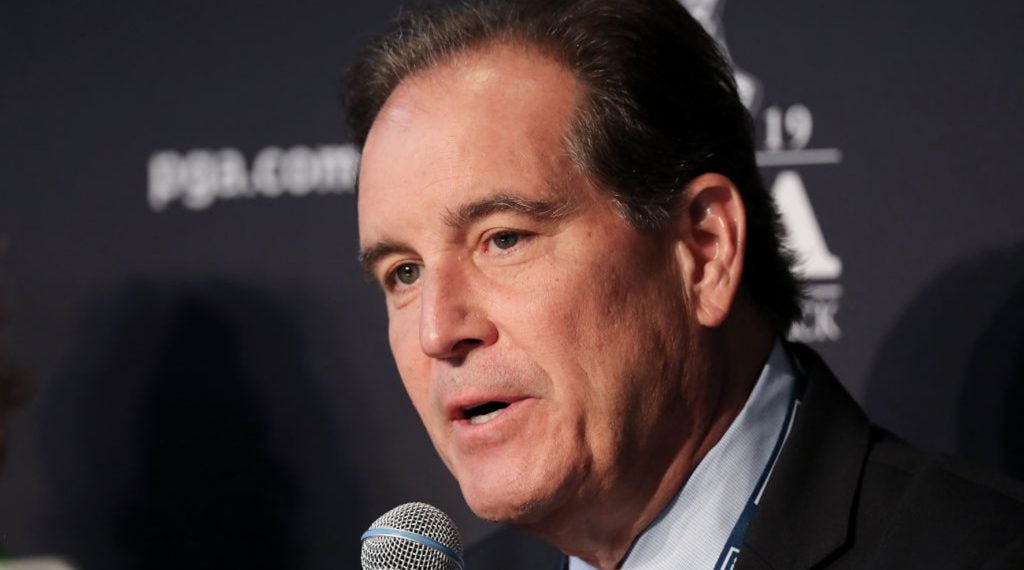 Jim Nantz made a very early prediction for who would win the U.S. Open.
Getty Images

“I think [Phil]’s gonna win at Pebble,” Nantz said. “I want to put that on the record right now. I think Phil is going to win the U.S. Open.”

“The Sunday of the U.S. Open is his birthday, and I like stories. I like to figure out how history ties to the present,” Nantz continued. “His grandfather Alfred Santos, his mother Mary’s late father, was one of the original caddies at Pebble Beach. Phil’s grandfather and Alfred’s brother were two of the original two in the caddie yard at Pebble. What an American Dream that you could have a grandson later walk those some fairways. Instead of what his grandfather was making at 25 cents a bag, now he’s going to close out the career grand slam on the sacred sod of Pebble Beach on his birthday. The story is too good and he has too good of a record there for me to overlook it. I think he wins at Pebble Beach.”

Nantz is certainly right about Mickelson’s record at Pebble Beach. He’s won the AT&T Pebble Beach Pro-Am five times in his career, including this past February. That’s tied for the most all-time in the event’s history.

But the only major title that Mickelson has never won is the U.S. Open. He’s played in three Opens at Pebble Beach, with his best finish coming in 2010 with a T4 result. Mickelson missed the cut in 1992 and finished T16 in 2000. He’s also earned six runner-up finishes at the U.S. Open in his career.

Given Phil’s familiarity and success at Pebble Beach, many believe that this U.S. Open is his last best chance at securing the career grand slam. Mickelson even admitted it himself at the Memorial Tournament last month.

“The difficulty is that when you’re in your 20s you feel like you have multiple chances,” Lefty said. “And when you’re turning 49, you’re like I’ve got two more chances, this year, and maybe Winged Foot, and that’s about it. With that being the only one in the four that I haven’t won, and what it would offer me and how I look at my career, I put more pressure on it. That’s the difficult thing.”

But Mickelson has been getting help preparing for the U.S. Open from his good buddy Nantz at the sportscaster’s Pebble Beach home. The five-time major champion made a hole-in-one on Nantz’s replica of Pebble’s iconic par-3 7th hole in his backyard last week.

Lefty hasn’t won a major title since the 2013 Open Championship, and he finished T-71 at the PGA Championship last month in his most recent major tournament appearance.