Trump National-Bedminster is drawing criticism from ethics experts for offering discounts to White House staffers. A Politico report dives into the perk offered by the New Jersey golf course owned by the president. White House staffers with a Secret Service hard pin receive the same discount available to club members.

Those discounts cover merchandise in the pro shop and range from 15 to 70 percent off, staffers told Politico. President Trump and his daughter Ivanka made the original pitch to offer the discounts, according to the report. The White House denied Ivanka’s knowledge of the discount. 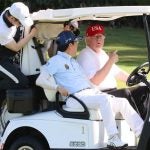 The perks may be in violation of the regulations put in place by the Office of Government Ethics. “It’s prohibited under the standards of conduct for any government employee to accept a gift because of their official position,” said Virginia Canter, chief ethics counsel at Citizens for Responsibility and Ethics in Washington. “The fact is, people’s access to that facility is…limited to staff who have access to the facility and second of all, who are given access to the Secret Service pin. It’s not OK.”

The report is the latest chapter in the complex relationship between the president’s role as head of state and his position as a business owner. Trump has blurred those lines repeatedly — this isn’t the first time his pro shop generosity has raised complications. The president has also offered apparel and pro shop gifts to Republican aides who join him for rounds of golf at his courses in West Palm Beach or Sterling, Virginia.

White House press secretary Sarah Huckabee Sanders did not comment on the report. You can read the entire report here.