Bad news, Tony Romo fans: your favorite quarterback disappeared at the start of the fourth quarter.

The good news? The professional sporting event in question was a golf tournament on the Northern Texas Players Tour — and, even better, Romo still has three weeks before he has to tee it up in his first official PGA Tour event, the Corales Puntacana Resort & Club Championship, March 22-25 in the Dominican Republic. That’s a lot of practice time!

Still, there’s no denying that Romo’s latest tuneup went poorly, as he withdrew from the mini-tour event after a rain-delayed 27 holes to catch a flight, according to the PGA Tour’s Sean Martin.

The former Cowboys quarterback got off to a rocky start at Bridlewood Golf Club, making bogey on his first hole and a quintuple bogey 10 on No. 2. After pars on No. 3 and 4, Romo tripled the par-4 5th and bogeyed No. 6 to reach 10 over.

In his defense, Romo settled down from there, making two birdies against one bogey the rest of the round to post nine-over 81. On day two, he got off the blocks more smoothly, shooting two-over 38 on his first nine before the rain set in. At 11 over par and far from contention, Romo withdrew.

He wasn’t alone: seven other players in the 87-man field also pulled out of the event, presumably due in part to the delay.

Toni Hakula, a former University Texas teammate of Jordan Spieth, won the event by shooting 61-67 for a two-day total of 16 under par. 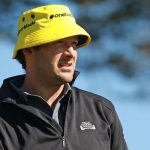