After winning the NCAA Division I Men’s Basketball Tournament on Monday night, Virginia head coach Tony Bennett asked sportscaster Jim Nantz if he could get Bennett and his dad into Augusta National for a round of golf.

Bennett and his team were on the podium at center court receiving their national championship trophy when Nantz, the voice of March Madness for CBS, approached Bennett to get his postgame thoughts and reactions on the win. After speaking for a bit about what the win meant to the program, Bennett threw a curveball at Nantz to close out his speech.

When asked what it meant to have his father, former college basketball coach Dick Bennett, at the Final Four cheering on he and his team, Bennett shared a promise his father made to him.

“My dad said if I ever make it to the Final Four, he’d come and play Augusta with me,” Bennett said to Nantz. “So maybe you can get us on that course, alright?”

Hear from Tony Bennett after his @UVAMensHoops squad win the #NationalChampionship! #GoHoos pic.twitter.com/ebjjLuedie

Of course, Nantz is as synonymous with the first major of the golf season as are pimento cheese sandwiches. The sports broadcaster will be flying this week from Minneapolis to Augusta to cover the Masters, an annual occurrence for Nantz once the NCAA Tournament concludes and golf’s major season begins.

Later this week, we’ll be hearing Nantz greet viewers with his iconic “Hello, friends” sign-on and emcee the green jacket ceremony for the Masters champion in Butler Cabin. 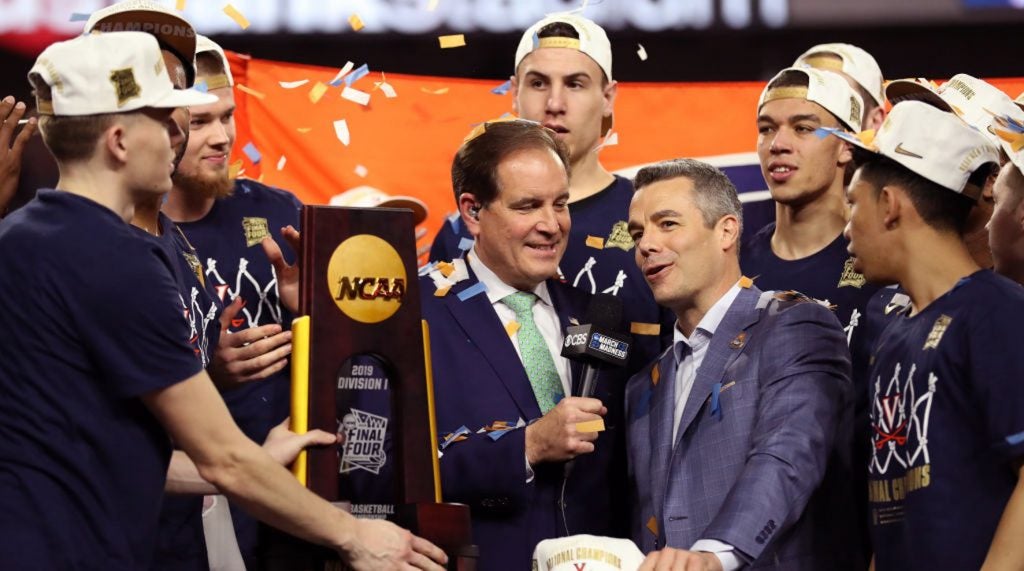 Tony Bennett asked Jim Nantz if he could help get him a tee time at Augusta National.
Getty Images

Bennett’s Cavaliers defeated the Texas Tech Red Raiders 85-77 in overtime at U.S. Bank Stadium in Minneapolis, Minnesota to capture their first men’s basketball national title in school history. It was Virginia’s first trip to the sport’s Final Four since 1984, and the school’s first-ever appearance in the championship game.

After winning your first-ever national championship as both a school and coach, a round at Augusta National would be a perfect way to celebrate. Here’s to hoping Bennett and his dad get their wish granted by the voice of the Masters.