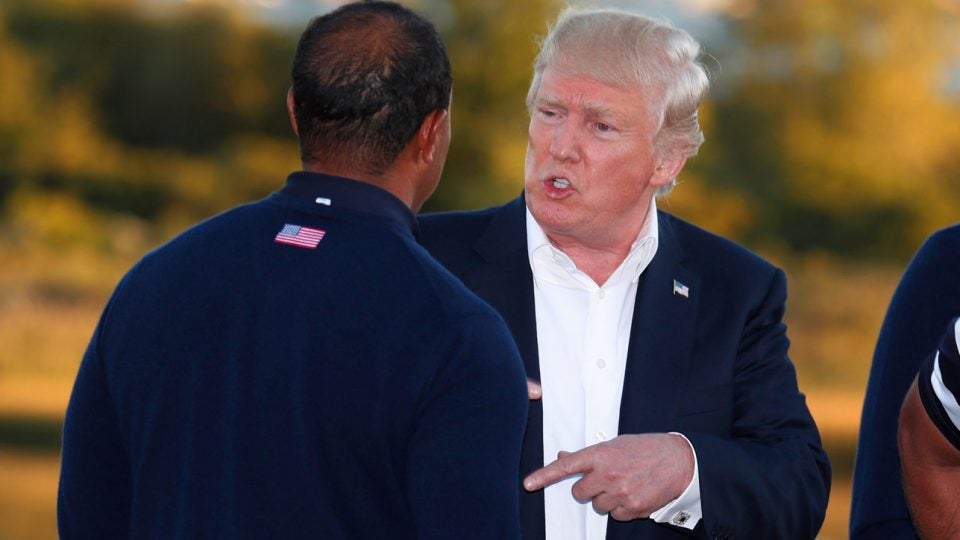 Tiger Woods is not at the Wells Fargo Championship this week. While his yacht is parked near Bethpage Black on Long Island, his whereabouts are unknown. But we do know where he will be next Monday. According to the Wall Street Journal, Woods will visit President Donald Trump in the White House to celebrate his 2019 Masters victory.

The planned visit appears to stem from a congratulatory phone call Trump made to Tiger following Tiger’s Masters win two weeks ago. The day after Woods claimed the green jacket, Trump tweeted: “Spoke to @TigerWoods to congratulate him on the great victory he had in yesterday’s @TheMasters, & to inform him that because of his incredible Success & Comeback in Sports (Golf) and, more importantly, LIFE, I will be presenting him with the PRESIDENTIAL MEDAL OF FREEDOM!”

It is unclear at this point whether Monday’s visit will include the Presidential Medal of Freedom ceremony, which is one of the highest civilian honors in the United States. Since its creation under President John F. Kennedy in 1963, presidents have given the award to those who have made influential and significant contributions to the well-being of the country.

Three golfers have already won the award. President George W. Bush bestowed the honor on Arnold Palmer in 2004 and Jack Nicklaus in 2005. Charles Sifford, the first African-American to compete on the PGA Tour, was similarly honored by President Barack Obama in 2014.

While the Medal of Freedom ceremony is the most likely reason for Tiger’s trip to the White House, it could also be simply to celebrate his Masters victory. Teams from the major pro and college sports leagues are often invited to the White House after winning a championship.

Celebrities
‘Tiger is back’: President Trump tweets about round with Woods, Nicklaus

The University of Virginia’s men’s basketball team, which won the NCAA title this year, recently turned down an invite to meet with Trump.

For Woods, it will not be his first time visiting the White House or meeting President Trump. Woods played a round with Trump earlier this year — he’s played golf with him before, too — in outing that also included Nicklaus. He visited President Obama in the White House in 2011. Woods also made multiple trips to the White House with victorious U.S. Presidents Cup teams.