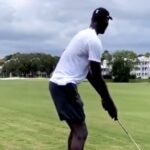 Tacko Fall owns the title of the NBA's tallest player and most adventurous fairway swing.

Fall, the Boston Celtics center, is the tallest player in the NBA, standing a whopping 7-feet-5-inches tall in his socks. By NBA standards, he dwarfs Bamba, the Orlando Magic center who’s a diminutive 7-feet flat.

The two ballers got together on Monday to play golf, presumably on one of Disney World’s plethora of golf courses in Orlando.

There’s been no word from the pair of big men on whether they were channeling their inner Michael Jordan, stoking their respective competitive flames on the course. But regardless of who won their match, we’re all winners after Bamba posted a video of Fall’s hilariously outsized (and fairly impressive) attempt to hit driver off the deck to his Instagram story.

There’s not much to work off, but let’s dive into Fall’s game a bit:

His swing, while short and lacking a proper follow-through, does produce a solid amount of hip rotation. He generates power through rotation of his thoracic spine, which he loses from a weak grip and unsteady feet.

It’s also clear from watching his swing that he’s been fitted for clubs, if for no reason other than the fact that he’s capable of standing mostly upright.

The duo of Fall and Bamba are both currently part of the NBA bubble, which has descended upon Disney World for the foreseeable future. While players have been separated from their families and forbidden from leaving the “NBA campus” to avoid contracting Covid-19, they are allowed to use any number of the amenities available on-site. Players are welcome to hang out in pools and go fishing, in addition to having access to card tables, video games, TVs, movie screenings and — of course — golf courses.

It’s likely Fall and Bamba won’t be the last professional hoopers to post a swing video in the near future, though if we had to choose, we’re still rolling with Steph Curry as our NBA playing partner.