Inside Santa Claus Golf Club, where the greens are ‘whites’ and reindeer roam the fairways 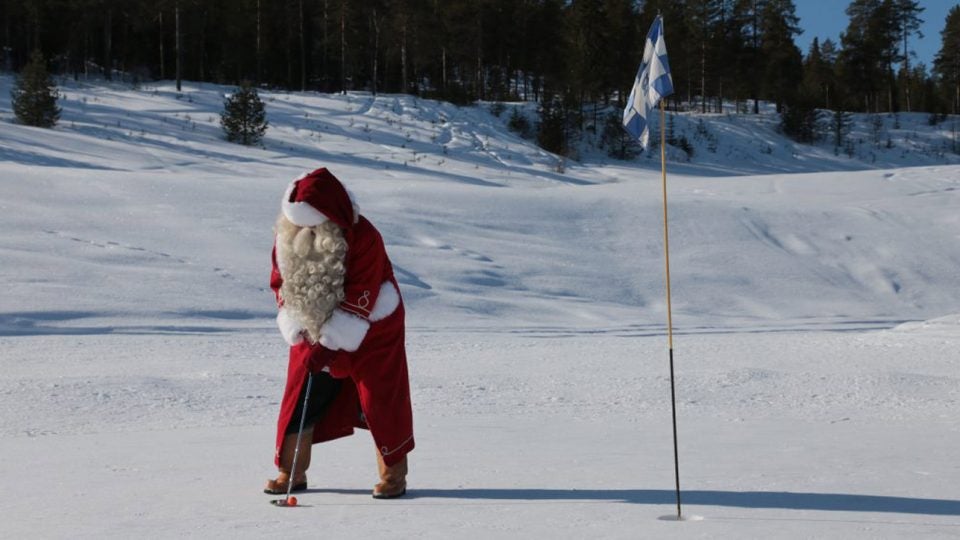 Talk about a slippery putt.
All photos courtesy of Santa Claus GC

when all through the clubhouse,

Not a creature was stirring—

—well, that’s not entirely true. Creatures were, in fact, stirring when I called Santa Claus Golf Club on Thursday afternoon. Golfers weren’t, though. (Too dark, too cold.) Nary a sign of St. Nick, either. (Too busy.)

“Sometimes we do see his footprints in the snow,” Pia Lillberg, the club’s cheery managing director, told me by video conference.

She was joking. I think.

Santa Claus Golf Club — yes, it’s actually a thing — sits directly on the Arctic Circle, in Rovaniemi, Finland, about 500 miles north of Helsinki. There are no sleigh-carts or elf-caddies or gift-wrapped tee markers, and, no, you don’t get coal after a triple-bogey. But the club does have reindeer. About 30 of them. Lillberg says they’re “quite nice to play with,” if unschooled in the finer points of golf etiquette. Knock your tee shot into a flock, she said, and they’ll be in no rush to clear out. (Evidently the presence of reindeer sausage on the halfway-house menu has not put a scare into them.)

When the club was founded in 1986, it had a far less recognizable name: the Golf Club of Rovaniemi. Its course was built not on grass but on ice and open only in the depths of winter: nine frigid holes set on the river that bisects the city. A few years later, a “summer course” emerged on terra firma with six fairways and a practice area, followed, in 1997, by a nine-hole layout. In 2011, the membership tacked on another nine — resulting in a par-71, 6,500-yard design that winds its way up and down a hillside lined with pine trees — but it wasn’t until a couple of years ago that the club acquired its current moniker.

“As we are in the Official Hometown of Santa Claus,” Lillberg said (yes, that’s a thing, too; Rovaniemi has it trademarked), “it’s only appropriate that we, too, carry the name. Somehow it seems more suitable to talk about Santa Claus golf than Arctic golf.” It’s also more marketable. The club is in the process of launching a shop on its website where visitors will be able to buy Santa Claus GC-logoed hats, shirts and balls — the perfect stocking stuffers for the golfer in your life.

“Sunrise was at 11:07 am today and sunset was 1:22 pm,” said Lillberg, who speaks excellent English with a heavy Nordic accent. “It’s not practical to go and play in the dark.”

It’s also not practical to play in the snow. But that doesn’t stop SCGC’s hardy membership from bundling up and playing the club’s “winter course,” a snowy nine-hole layout (complete with “whites” instead of greens) that the grounds crew spends a couple of months shaping. “We have to have 40 centimeters of snow before we start building it,” Lillberg said.

The course opens in early March, when the days are longer and the temperatures more tolerable. When the sun’s out, the “snow shines like crystals,” Lillberg says, turning the place into a magical golfing wonderland. “It’s perfect. I really can’t say enough good things about it.”

The course hasn’t drawn many American tourists, though one notable member of the golfing establishment did visit last March: USGA executive director Mike Davis. In his first foray in to snow golf, Davis competed in the Santa’s Snow Golf Classic. (“The whites putt beautifully,” he said at the time. “They’re actually not too different from a regular putting green.”) Papa Noel doesn’t visit the course much, either, what with all his duties down in Santa Claus Village. He has some other forces working against him, too, Lillberg says: “It’s a bit difficult for him to see the ball because of the stomach and the beard.”

Still, whether the big man is on site or not, his spirit thrives at the club that bears his name, from Rudolph and Co. grazing in the rough, to the twinkly Christmas decorations in the restrooms, to the staff that runs the place.

“I have to make a confession,” Lillberg said at the end of our call. “I’m actually an elf in disguise.”

Yep, for 10 years, Lillberg said, she moonlighted as one of Santa’s helpers, sorting letters for him at the post office in downtown Rovaniemi.

I laughed when she said this in spite of myself,

A wink of her eye and a twist of her head

Soon gave me to know I had nothing to dread.