Former Presidents Barack Obama and George W. Bush are now members of the same Florida golf club, according to its owner.

“Mr. Obama had been to our place a few times before and had a little down time, he was doing some work in Florida, and spent a few days there playing golf,” Crane said.

“And I got to play with him and Tiger one time. It was a lot of fun, he’s a fun guy to play with,” he said, adding the fact that Woods is playing well and “pain-free.”

But Crane made it clear that his club doesn’t favor one side of the aisle.

“He’s a new member and so is George W., so I’m very neutral on the politics,” he said.

Crane purchased Floridian National in 2010 from Wayne Huizenga, a high-profile Florida businessman and former owner of the Miami Dolphins, Florida Marlins, and Florida Panthers. Crane oversaw a renovation of the club and course, which was redesigned by Tom Fazio. 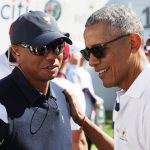 You may also like Presidents Obama, Clinton and Bush steal the show at Presidents Cup