Faxon: Trump found out about Egypt bombing on 9th hole during round with Tiger, DJ

In an interview with Fox News on Tuesday morning, Brad Faxon revealed several new details of his much-heralded round with President Trump, Tiger Woods and Dustin Johnson, including that the president found out about Friday’s terrorist attack in Egypt at the end of his front nine.

When asked by host Steve Doocy if any policy-related questions had come up, Faxon explained how the president had been briefed.

“The bombing in Egypt happened while we were on the 9th hole and somebody – I dunno if it was a press secretary — came out there and told us about it,” Faxon said. “He brought us all together and said, y’know, here’s a terrible act of terrorism, and he had to release a statement. So they talked about that alone, released a statement.

“We didn’t have all the details obviously,” Faxon continued, “but just the fact that this keeps happening, and happening on holidays and in mosques or churches is just awful.”

“It was really impressive how they handled it all so quickly, too,” Faxon said.

“They came out to golf cart 1,” Doocy said, chuckling.

Host Brian Kilmeade asked Faxon about the rest of the round as well. “I understand the president acted like he didn’t have a care in the world, just loved it, right?” 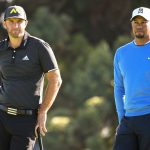 You may also like Faxon: Tiger Woods outdrove Dustin Johnson roughly half the time during round with Trump

Faxon and Trump rode in a cart together and played the blue tees in a match against Johnson and Woods.

“He’s a legitimately good player,” Faxon said of the president. “He’s a single digit handicap, he drives the ball pretty straight, he has that draw that every player who plays this game wants to have. He probably hits it 230 or 240 yards.