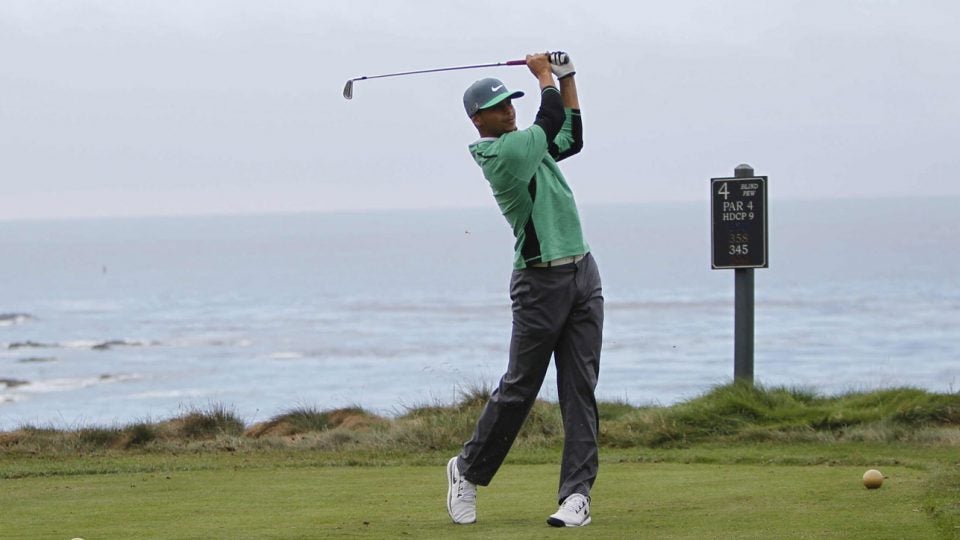 This story originally appeared in the Sept. 9, 2013 issue of Sports Illustrated.

If a round of golf can reveal a lot about a person’s character—a spurious concept, we know, but just go with it—a recent 18 holes with Steph Curry showed him to be a charming young man, a superb athlete and money in the clutch. But all of these qualities have already been on display during his day job as point guard for the suddenly relevant Golden State Warriors. The revelation from this round at Spyglass Hill, in Pebble Beach, Calif., is that Curry is an unabashed golf nerd. When he stiffed a wedge on the 15th hole, he called it “a Jason Dufner tap-in.” (This was six days after the Duf’s victory at the PGA Championship.) Spying a playing partner’s SeeMore blade, he said, “That’s Zach Johnson’s putter, right?” He spoke knowledgeably about different strains of grass (“There’s not much grain in this poa”) and esoteric equipment specs (“I get a much higher launch angle with this driver”). Uh, Steph, exactly how much golf do you watch? “A lot,” he says. “Too much. The TV at home is pretty much always on the Golf Channel.” Unless he’s playing his favorite video game, Tiger Woods PGA Tour 14.

At 6’3″ and 185 pounds, Curry has the build of the young Tiger—supple and sinewy—and he generates some of the same terrifying power with his compact, upright swing. Spy’s 11th hole is a sweeping dogleg right par-5, measuring 528 yards. After launching a butter-cut around the corner, he was left with a mere 152 to the green. On the par-5 7th hole, Curry set up another eagle putt with a towering four-iron from 218 yards. But you don’t whittle your handicap down to scratch, as Curry has, merely by generating vortex-inducing clubhead speed; his putting stroke is almost as pure as his shooting stroke. Spyglass has long been considered the toughest course on the Monterey Peninsula, but Curry torched the place for six birdies and shot a two-under-par 70. Along the way he broke the spirit of previously chirpy adversaries in a betting game, his father, Dell, and Warriors co-owner Joe Lacob.

“That was one of the best rounds of golf I’ve ever seen,” said Lacob, who is a regular competitor in the Crosby Clambake. With typical understatement Curry allowed, “Yeah, I played pretty good.”

Curry, 25, has been making birdies almost as long as he’s been making baskets. He came to the game through Dell, who for Christmas in 1987 received a set of golf clubs from the Cleveland Cavaliers, for whom he was a feared long-range marksman. The sticks gathered dust for more than a year, by which time he was playing for the Charlotte Hornets. One day during the off-season sheer boredom drove him to the driving range. Says Dell, “You know the old story: I hit one good shot, and I was hooked.”

That was the year Steph was born, so eventually his old man cut down a putter for him and they learned the game together. “My favorite thing about golf has always been getting to spend time with my dad,” says Steph. (His kid brother, Seth, who just signed a rookie training-camp contract with the Warriors, sometimes tags along but struggles to break 100.) Dell is a player: After he retired in 2002, he got down to scratch and now, at 49, still carries a sporty 4.8 index. “But every year [Steph] gets longer off the tee and I get shorter,” says Dell, a founding member of the Club at Longview, outside Charlotte. “It’s kinda sad. How old were you the first time you beat me? Fifteen?”

By then Steph had been taking lessons at Larkhaven Golf Course, which Dell calls a “goat track,” in Charlotte. He was a bright, curious kid who enjoyed the internal challenge of improving and the technical aspects of the golf swing. But as Steph tells it, he joined his high school team mostly so he could cut class. “Every Tuesday and Thursday we got out at 12:30 to go play matches,” he says. “I’d rather be outdoors than in a classroom.” His fondest competitive memory came at the conference championship in his senior year, at which he finished second. The final round was the first time he broke par, shooting a one-under 70 at the Cedarwood Country Club, though it wasn’t without some drama on the closing par-4.

“It’s funny, I can remember it like it was yesterday,” Curry says. “I flared a drive into the trees and had to punch out. Then I got up-and-down from 100 yards.”

His low round now is a 66, shot a couple of years ago in Hawaii.

“Where’d I shoot that 66?” Steph asked his dad at Spyglass.

If a golfer has trouble keeping track of his rounds in the mid-60s, that can only mean one thing: He’s confident that more are on the way. Spyglass was just part of Curry’s off-season golf binge. In the ensuing three days he played Cypress Point, the Shore Course at Monterey Peninsula Country Club and Pebble Beach, an epic itinerary that goes a long way toward explaining why he chose to hold his annual basketball camp in the area. (Where is next year’s gonna be, St. Andrews?) Curry and his very understanding wife, Ayesha, recently bought their dream home in Orinda, in the East Bay, enticed by a big backyard for their one-year-old daughter, Riley. But he doesn’t have a home course because he doesn’t need one. “He’s America’s guest,” says Dell, who is often the guest’s guest.

Steph never wears out his welcome because he is such good company on the course. When I chipped in for a par on the 4th hole—don’t ask—he seemed way more excited than when he made his ensuing six-footer for birdie. He asks a lot of questions of his playing partners, a rare quality in the self-involved world of pro athletes. Even rarer among golfers: He didn’t utter a single profanity over the course of 18 holes. (Of course, six birdies does tend to help one’s disposition. Or so we’ve heard.) The only time Curry seemed even mildly perturbed was on the 10th hole, when he drew a nasty lie in the rough. “No me gusta,” he said with a sigh. He went on to make a hard-luck bogey but accepted it stoically.

Curry is naturally laconic, but the week before Spyglass he learned a hard lesson about modulating his emotions on the golf course. Competing in a celebrity tournament at Lake Tahoe, he opened with rounds of 72 and 70 to take the lead, but during the final round he fatted shots on the 15th and 17th holes, making bogeys that sent him skidding to fourth place. “That was the most nervous I’ve ever been in my life,” he says. “I never get nervous on a basketball court. I might get butterflies before a big game, but that’s excitement. In Tahoe my hands were shaking. I got going too fast and made some mistakes. I learned from that.”

He applied those lessons on the back nine at Spy. Curry and I were teammates in a better-ball match, and to our chagrin, back-to-back birdies by Dell on 11 and 12 put him and Lacob up in four bets. They were strutting around as if they owned the place, which is sort of true, because Lacob has a vanity stake in the Pebble Beach Co. “Time to play some golf, partner,” Steph intoned.

On the 15th hole he nearly jarred his tee shot on the downhill par-3; when his ball trickled by the cup, Curry did one of those cute little one-legged hops that follow his momentum-changing three-pointers. The 16th hole at Spy may be the hardest par-4 in California, but he tamed it with two perfect shots, leaving a 25-footer for birdie. Meanwhile, Lacob was in-pocket, and Dell was in the trees with his drive. He then skanked a shot well short of the green, duffed the chip … and then drained a 40-footer for par. At which point Lacob loudly reminded us that his partner was stroking on the hole, which meant that Steph’s birdie was do-or-die. As he examined his putt, an eerie calm came over Curry, a look that should be all-too-familiar to Nuggets and Spurs fans. “When I’m swinging the club, I don’t overthink it,” he would later say. “I just settle into a good position and let my athletic ability take over. Putting is more like free throw shooting. I focus on the preshot routine, paying attention to the details. Then I get over the ball and let my mind go blank.” The putt on 16 was never anything but good. When his ball disappeared into the hole, Curry raised his putter like Jack Nicklaus circa April 1986 but never said a word.

At the 17th, your correspondent made a rare contribution to the match with a birdie, and then Curry slammed the door with a textbook par on 18. We had rallied to win the back nine, the overall and an extravagant number of presses. In the parking lot pleasantries were exchanged, and then Dell dived into the front seat of his son’s black Porsche Panamera Turbo. Lacob slid behind the wheel of his Mercedes G-Wagen AMG and beckoned the Currys to follow him to his house off Pebble’s 14th hole, where they would be staying for the long weekend. After more than four hours of continuous trash talk about the match, the bets were never paid off, which Curry laughed about later. “Well, it was my dad and the owner of my team, so they get a pass,” he said. “The important thing was that we all had fun.”

“Nah, the important thing is that we won, and they know it. That means more than money, partner.”