On Thursday at Liberty National, the biennial competition between the U.S. and International teams truly could be called the Presidents Cup.

Day 1 of the event kicked off with a ceremonial tee shot at Liberty National in New Jersey, and standing by watching the action were the last three presidents to serve: George W. Bush, Bill Clinton, and Barack Obama. 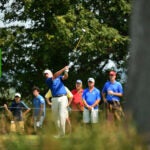 You may also like U.S. captain Steve Stricker: Players won’t be protesting during anthem at Presidents Cup

The power trio, part of an exclusive club with only six living members, chatted with players, fans and each other in a nice display of unity and respect that is all too rare these days. You can see photos below.

Presidents at the Presidents Cup. pic.twitter.com/jdCwdc1VOM

The current president, Donald Trump, was not in attendance, but he is expected to attend the event’s final round on Sunday.