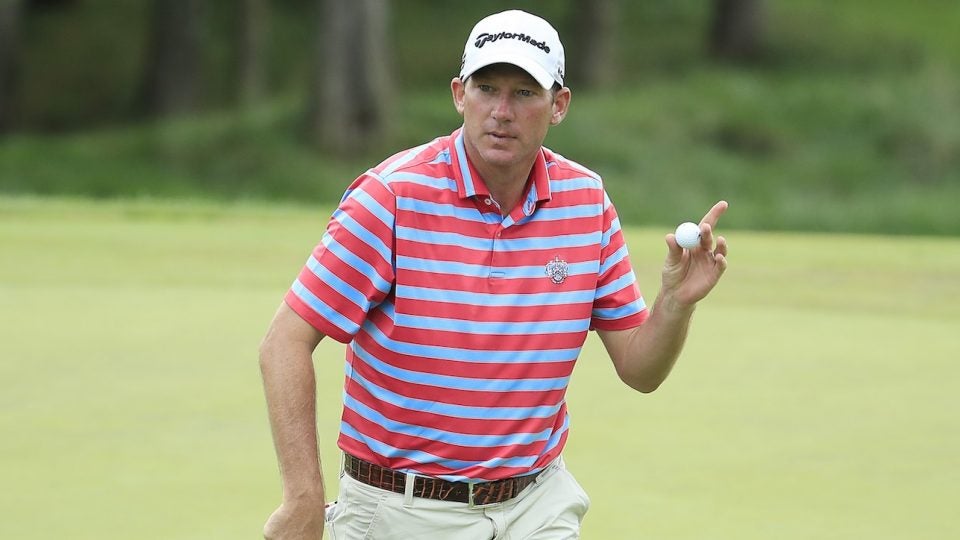 Jim Herman reacts after a putt on the 13th green during the final round of the Barbasol Championship.
Getty Images

Jim Herman has endured his fair share of struggles. In 19 tournaments prior to this weekend, Herman made the cut in just three of them.

This past weekend, though, Herman won the Barbasol Championship at Keene Trace Golf Club in Nicholasville, Ky., shooting 26-under to narrowly edge Kelly Kraft.

And he has a rather improbable figure to thank for it.

“(Donald Trump) gave me a good talking to and told me to use a different style if it’s not working,” Herman said on Friday. “Some great advice, so I appreciate it.”

The two play regularly together at Trump National Bedminster in New Jersey. It was there that the President suggested an ailment to Herman’s recent putting woes. Amid these struggles, Trump told Herman to go back to a traditional putting grip.

Herman said that Trump even called him up Friday night after his second-consecutive round of 65.

“That was very unexpected to hear from him directly on Friday night,” Herman told the AP. “I got a phone call from him wishing me on for the weekend and congratulating me on my first two rounds. It’s pretty amazing I’ve had this relationship with him. I’m very fortunate I get to play a little golf with him.”

The results speak for themselves: Herman carded 24 birdies and two eagles, including blistering rounds of 65, 65 and 62 his first three days. He finished the week fourth in the field in strokes-gained putting, the main catalyst behind his career-altering week.

“I think I need to see (Trump) again soon,” Herman said shortly after securing his win. “He motivates me and puts me in a good spot.”