Why Bryson DeChambeau is chronicling his life (and, yes, chasing more speed) on YouTube 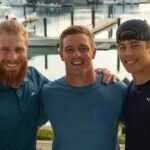 DeChambeau is pairing with a long drive pro and a TikTok influencer for a new business venture.

Bryson DeChambeau has been busy this off-season. Following on his successful stint dabbling in the world of long drive, he’s been training even harder in pursuit of a cruising ball speed of 200 mph on the course. Off the course, he joined with Long Drive pro Martin Borgmeier and fitness influencer Hogan Molthan to launch a new content creation company and YouTube channel, Regecy, which you can subscribe to here.

The company has big plans, DeChambeau says — its tagline is Here to Entertain, Educate and Inspire — and step one is a YouTube push. Over the past few months, the trio has published videos on everything from scramble matches, to PED myth-debunking, to attending fights in Las Vegas. Ahead of the first PGA Tour event of 2022, we sat down with DeChambeau and his two new business partners to learn more about his venture, and what else he’s been up to this off-season.

This interview has been lightly edited for clarity and brevity.

Luke Kerr-Dineen: First things first, Bryson, what have you been up to this off-season?

Bryson DeChambeau: The past couple of seasons have been a lot of fun, but really tiring. The Ryder Cup and competing in World Long Drive was such a fun way to end it, but I was pretty spent afterwards. It’s been great to get away a little bit, but I’ve still been working hard. I’ve been working out every day and speed training to my goal of averaging 200 mph on the golf course, and I’ve been practicing a lot of wedges! Sometimes people don’t think I ever practice wedges, but I do all the time, they just don’t always see it.

LKD: We’ve actually seen you practicing lots of wedges, among other things, on YouTube now, though. What appeals to you about that platform?

DeChambeau: I was in the Twitch space early on, and I realized that live streams are difficult. Sometimes things can get misconstrued when it’s live. When you say something you mean in a certain way, and it comes off in a different way. With YouTube, it was a little different. I was having fun doing little videos during [quarantine] and started to see some of my YouTube content do really well. I became friends with Hogan earlier this year, and I started asking him questions about the social media space. Some people continue to say certain things that are just untrue about me, so I want to keep producing content than showing people who I truly am, which is to be very positive and help inspire people. I started to see a loyal fanbase following along. But I didn’t want to do it by myself. I wanted to do it with people who are doing unique and interesting things.

LKD: What was it about Hogan and Martin that made them good partners for this?

DeChambeau: Hogan’s a great guy, very athletic, a workaholic in the gym and a TikTok influencer who knows social media. He’s also a former college golfer and a really long driver who’s trying to get more speed.

I got to know Martin around World Long Drive last year. He’s got the fastest recorded ball speed ever at 231 mph, and if he keeps training, he will be a force to be reckoned with.

We started Regecy because we want to help inspire a new generation of golfers, not only to to help them gain more distance off the tee, but to live a healthier, fitter lifestyle. We have some bigger ideas down the road, but it starts with bringing more people into the game on a platform like YouTube.

LKD: Martin, a few months into this project, what has stood out to you about Bryson chasing more speed?

Martin Borgmeier: What’s so crazy to me about Bryson’s development is that he was swinging slow, winning tournaments, and then completely reinvented himself, then won even more tournaments. It proves that everybody can do it if they put the right work in, and that’s what this is about.

LKD: Hogan, in the videos you come from all of this from more of a fitness perspective. What’s your advice to golfers trying to get stronger and swing faster?

Hogan Molthan: It’s funny, I played at New Mexico State, and my freshman year some people told me one of the things they really didn’t like about about me was how hard I swung at it. They kept telling me I needed to dial it back, but to me that was a fun aspect of the game. When I left, I was feeling really burnt out with golf, but I built a passion for the gym. When I left I weighed 163 pounds. Now, I’m 200 pounds. In the years since it all started to change. Now, some of my teammates hit me up and they’re like, “Hogan, can you give us some advice about how to get faster?”

One of my simple pieces of advice is to just go to the range, have a fun day and try to hit balls as far as you can for 10, 15, 20 minutes. Don’t overdo it and hurt yourself, but have fun with it. Make it a game. See how fast you can get. It takes a lesson to hit it straight; it takes longer to swing it faster.

How do you think golfers chasing more speed will impact the sport more generally?

Molthan: I think one of the biggest changes you’re going to see is from a body type perspective. We’re going to see more people with Martin’s body style out there: Just pure athletics. If you’re going to want to make it to the top in the next 10 years, you’re going to have to be an athlete. Obviously you have to have a good mental game and other skillsets, but you’re going to need to swing it 140 mph on the course too. I think that’s where we’re going. Having the speed and learning to hit it straight.

DeChambeau: If I could just jump in there to say I couldn’t agree more. When I started [speed training] I thought, ‘Oh, wedging is going to be impossible for me.’ But the more speed I gained, as time went on it actually became easier. The club feels more stable now. I have more control over it, you’re just applying your proportional strength to the club differently. But it’s a skill that you can train and learn and develop really easily. Once you have speed, it’s not a problem.

LKD: One of the themes in the videos is you guys learning from each other and competing with each other. What are some of the ways you compete with one other?

DeChambeau: We all have our different skills and strengths, and areas where we’re trying to get better. For me, it’s trying to achieve Martin’s ball speeds and to get as strong as Hogan.

Borgmeier: You know it’s amazing to me how many balls Bryson can hit inside the grid with his speed. We recently filmed a video of him showing me how to hit three different shot shapes with different launch angles and spin rates. That’s a skill that’s not about speed, but the skill of launching it. Bryson can obviously can wake up in the middle of the night and do that, but I’m learning how to get dialed into all these different shapes. For Hogan, it’s getting as fast as us and as accurate as Bryson.

LKD: We know you guys have lots more videos planned. Are there any that you’re especially excited about?