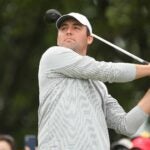 This year’s AT&T Byron Nelson features a star-studded field including lots of major champions, and many of them are among the favorites in the AT&T Byron Nelson betting odds via BetMGM. Here’s what you need to know.

When Scottie Scheffler arrived at the 2021 AT&T Byron Nelson, he ranked 24th in the Official World Golf Ranking and had yet to record a PGA Tour win.

A lot has changed in a year.

Now the World No. 1, Scheffler counts four wins on his resume, including his breakthrough first major win at the Masters a few weeks ago.

As a result, Scheffler is appropriately the betting favorite this week at +1000 in his first stroke-play event since his Augusta triumph. But he isn’t the only major champion near the top of the odds list. Justin Thomas comes in second in odds-to-win at +1400, with three-time major champ Jordan Spieth (+2000) close behind. Dustin Johnson (+2200), Hideki Matsuyama (+2800) and Brooks Koepka (+3300) are among the top 10 as well.

If you’re looking to bet on a long shot this week whose chances are likely better than his odds, take a peek at Ryan Brehm. The 36-year-old journeyman pro nearly lost his Tour card this year. But in his last eligible tournament at the Puerto Rico Open in March, Brehm pulled off an unlikely win — the first of his career — to secure his status for two years to come.

Brehm hasn’t played great in the aftermath, missing three of four cuts in stroke-play events, but he did finish T14 at the Zurich Classic of New Orleans alongside Mark Hubbard. This week, Brehm has +40000 odds to win, which are extremely long odds for a recent Tour winner. Should you risk a small $10 bet on Brehm this week and he pulls it off, you’ll earn a cool $4,000.

You can see the top 15 in AT&T Byron Nelson betting odds as of Monday afternoon below, or head over to BetMGM to see the full list of odds and bets for this week.

How to bet on the AT&T Byron Nelson

A senior producer for GOLF.com, Cunningham edits, writes and publishes stories on GOLF.com, and manages the brand’s e-newsletters, which reach more than 1.4 million subscribers each month. A former two-time intern, he also helps keep GOLF.com humming outside the news-breaking stories and service content provided by our reporters and writers, and works with the tech team in the development of new products and innovative ways to deliver an engaging site to our audience.