Why DJ keeps his practices short and sweet, according to Claude Harmon III 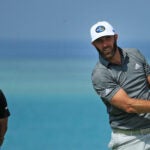 When golf fans think of Dustin Johnson, they often focus on his supreme athleticism. Admittedly, there’s a lot to be impressed by: 6-foot-4 and 220 pounds, he’s the kind of prototypical athlete that would’ve excelled in a number of sports had he not turned to a golf club.

But in this week’s Off Course podcast, presented by GOLF Top 100 Teacher and DJ’s coach Claude Harmon III (which you can subscribe to on iTunes right here), Claude explains why DJ likes to keep his post-round practices short, sweet, and feel-based.

“Most people don’t realize that Dustin Johnson in the modern game is known for his distance, he’s known for his power, but he’s the ultimate feel player,” Harmon says at the six minute mark in the podcast below.

In a nutshell, DJ isn’t looking to reinvent the wheel with these practice sessions. He’s trying to tune-in his feels, and specifically,

, when it comes to practicing either before or after rounds during a tournament, DJ doesn’t let himself get bogged down in the details. It’s good advice for the rest of us, too: Rather than spending hours on the range searching, Claude says DJ is all about finding a feel.

“He’s so hyper-talented, and such a freak athlete, that DJ’s practice schedule isn’t what you think it was,” he says. “On Wednesday we went to the putting green…and we were there for about 10 minutes. Most players, they’re there for 30 minuets, they’re there for an hour really grinding. But that’s just kind of an interesting insight into how DJ’s brain works and the way he thinks about things. He’s able to go in, and as soon as he gets one specific feel, he’s good.”

Keeping it simple and feel based. That’s the formula for one of the best players in modern history, and something that might serve us well, too.