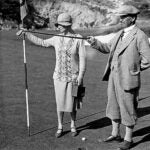 Alister MacKenzie with his wife, Hilda, on No. 15 at Cypress Point. Rule 14? Some things need mansplaining.

Ever the Renaissance man, Rules Guy — when not sipping a single-malt Scotch by a roaring fire and perusing The Rules of Golf — enjoys reading about course architecture, particularly the work of Alister MacKenzie, one of Rules Guy’s true heroes.

In honor of GOLF’s latest Top 100 Courses in the World list (verily, we consider the good Dr. MacKenzie’s front side at Michigan’s Crystal Downs the finest nine holes anywhere), behold RG’s thoughts on the eminent Scot’s famous “13 Principles of Golf Course Design,” which appear in both his 1920 classic Golf Architecture and his posthumously published The Spirit of St. Andrews. What is a principle, after all, if not a personal rule?

RULE 1. The course, where possible, should be arranged in two loops of nine holes.

The wisdom of this first became apparent to Rules Guy when he played Couplet GC, featuring nine loops of two holes — tedious in the extreme. Up, back, up, back…

RULE 2. There should be a large proportion of good two-shot holes, two or three drive-and-pitch holes and at least four one-shot holes.

Left unsaid, but implicit, is the wise idea that there also should be a small proportion of bad two-shot holes. We need something to moan about at the 19th hole, after all.

RULE 3. There should be little walking between the green and the tees, and the course should be arranged so that in the first instance there is always a slight walk forwards from the green to the next tee, then the holes are sufficiently elastic to be lengthened in the future if necessary.

The doctor had a bit of the Nostradamus about him, already contemplating the notion that distance advances were inevitable — nearly a century before titanium drivers!

So sayest us all! (Side note: Where would an architect or golf writer worth his saddle shoes be without the word undulating?)

RULE 5. Every hole should have a different character.

True story: Rules Guy once found himself at lunch with Michael Imperioli, just prior to his turn as Christopher Moltisanti on The Sopranos. Asked how he could tell when he was reading a good script, the actor replied, “When every character sounds different.” MacKenzie-esque!

RULE 6. There should be a minimum of blindness for the approach shots.

RULE 7. The course should have beautiful surroundings, and all the artificial features should have so natural an appearance that a stranger is unable to distinguish them from nature itself.

You know those cell-phone towers disguised with faux leaves to look like trees? MacKenzie the camouflage expert in action. (Don’t know them? Exactly!)

RULE 8. There should be a sufficient number of heroic carries from the tee, but the course should be arranged so that the weaker player, with the loss of a stroke or portion of a stroke, shall always have an alternate route open to him.

Members of relentlessly brutish Pine Valley no doubt will have a stroke, or at least a portion of a stroke, upon reading the above. The rest of us simply murmur, “Amen.”

RULE 9. There should be an infinite variety in the strokes required to play the various holes, i.e., interesting brassie shots, iron shots, pitch and run-up shots.

“Infinite” is asking rather a lot of course designers … but it’s a lot sexier than “sufficient.”

RULE 10. There should be a complete absence of the annoyance and irritation caused by the necessity of looking for lost balls.

Rules Guy takes issue with the grammar here, if not the underlying idea. MacKenzie sounds like he wants to remove the annoyance and the irritation, not the necessity, of looking for lost balls. In the meantime, only the golf gods know what the poor man suffers each April as he looks down upon the “second cut” at Augusta National.

RULE 11. The course should be so interesting that even the plus man is constantly stimulated to improve his game in attempting shots he has hitherto been unable to play.

Has there ever been a more felicitous phrase than “the plus man”? Oh, how Rules Guy yearns to be a plus man by and by in his next life …

RULE 12. The course should be arranged so that the long handicap player, or even the absolute beginner, should be able to enjoy his round in spite of the fact he is piling up a big score.

… when, alas and alack, Rules Guy is a “long handicap” player in this life, having piled up too many big scores. We blame the course arrangements!

RULE 13. The course should be equally good during winter and summer, the texture of the greens and fairways should be perfect and the approaches should have the same consistency as the greens.

You have to admire the man’s extraordinary ambition and drive. That said, MacKenzie was clearly a course architect, not a course superintendent, and never knew a Chicago winter, for starters. Please keep this guy off the Greens Committee — he’s a nightmare!

Browse our library of rulings and out-of-this-world decisions at golf.com/rules. Got a question about the Rules? Ask the Rules Guy! Send your queries, confusions and comments to rulesguy@golf.com. We promise he won’t throw the book at you.