5 things you can learn watching this LPGA pro navigate a U.S. Open hole 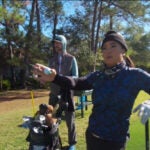 Golf is a game of athleticism and technique. That’s obvious to anybody who’s ever tried picking up a golf club and swinging it. But what makes golf such an enduring, wonderful game is that the athletic component isn’t all-encompassing. It’s also a game of strategy, and planning, and smarts. The goal is having both those elements working in unison. Like a bigger, athletic game of chess. And never is that more apparent than when I hear a professional golfer explain how they think their way around a golf course.

Such was the case when we got a chance to tag along with Christina Kim during her practice round at the U.S. Women’s Open. It’s pretty evident that she, like all pros, simply operates on a different level with the way she thinks on the golf course. And the good news is that it’s all stuff that recreational golfers can and should be thinking about if they want to lower their scores.

You can watch the full video below, but here’s a few things that stuck out to me.

It’s tempting when you play the same golf course a lot to pick one target and never alter from it.

The line here is down at the right edge of that bunker, sort of thing. I know I’m guilty of that.

But as Kim prepares to hit her drive on Jackrabbit’s 18th hole, she doesn’t fall into that trap. Even though she’s pulling the same club she always does — driver — she’s hyper-focused on how the wind affects her aim.

“If it wasn’t windy I could take it at the left edge of that bunker and use the speed slot,” Kim says. “The wind is kind of 10 or 11 mph today though…so I’m going to take it down the right side instead.”

It may seem obvious, but it’s a trap average golfers fall into all too often. Pay attention to the conditions, as Kim does, and let those dictate your target.

Not a specific piece of course management advice, per say, but it’s something Kim said Nancy Lopez told her when she first came up on tour. If you have a backswing, you have a shot, meaning: You don’t need to hit every shot perfectly. And, spoiler alert: You won’t hit every shot perfectly. But the good news is you also don’t need to. As Kim says, all you need is a full backswing to give yourself a chance of making a good number.

3. Play for your next shot

Another simple but important course management fact that pros live by is playing exclusively for your next shot. As I learned watching Bernard Langer pick apart Augusta National: It’s not about the shot in front of you; it’s about where you’ll be hitting your next shot from.

This means playing away from worst-case scenarios, which you can see Kim do on her second shot here. She’s got 205 to the hole, but she hits more club up the left side with the goal of leaving herself lots of green to work with for her next shot.

“I’m going to favor a little left because the green runs out on that right side, that gives me as much as 220 to work with on that left side, and that whole green runs down,” Kim explains.

Do you struggle with long putts?

4. Look for low spots on greens

And when you do get to the green, Kim says an easy way to understand the green contours you’ll be facing is to look for the low spots on the greens. That’ll give you a great idea for the direction your ball will naturally want to funnel — but beware, because sometimes course architects build-in counter-slopes to counteract this, which can be deceptive.

“Bodies of water are a good indicators of low spots,” Kim says. “But [in this case] they’ve built up the slope…so it’s combating against that slope.”

The lesson? Take in all your surroundings, and pay attention to the details.

For more help on the greens, check out green books from our sister-company GolfLogix. Their green books can be accessed from your phone and will save you strokes. Download the app today!

And finally, a lesson of Kim’s that we can all take to heart: Don’t overthink it. You’re on the course to play golf, so forget everything else and just play.