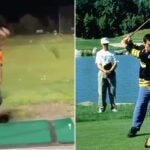 When Eliezer Paul-Gindiri agreed to go to the driving range with some friends, he had no idea it would make him social media star star.

When Eliezer Paul-Gindiri agreed to go with his friends to Diablo Creek Golf Course in Concord, Calif. for a night at the range, he had no idea that his first time picking up a golf club would make him social media sensation. But after video surfaced of the 21-year-old smacking drives with one arm deep into the California night, his viral status was secured.

The initial Tik Tok posted by Paul-Gindiri, also known by his handle _kvng_snappy, has racked up over 5 million views, with a follow-up video garnering another 1.2 million views. His swing has been shared on social media by the likes of Sports Illustrated, Barstool and SportsCenter, all adding to the gaudy number of plays the clip has accrued over the past week.

At this rate, more people will watch Paul-Ginfiri’s golf swing this week than any other pro golfer’s move — quite the accomplishment for someone who had no golf experience going into the week — and some on the internet have dubbed him “the new Happy Gilmore.”

“I’m absolutely surprised,” Paul-Gindiri told GOLF.com. “I didn’t think it would go viral or anything.”

There’s something about the swing that is irresistible. Arnold Palmer once said, “Golf is deceptively simple and endlessly complicated.” Paul-Gindiri definitely made it look simple. But complicated? Not so much. First timers are not supposed to hit the ball that well. And certainly not with one arm.

It’s like getting the correct answer on a math equation while using the wrong formula. Everything about the swing looks like it would be unsuccessful, yet the ball goes soaring through the air, time after time.

“I tried using two hands, but I kept hitting the ground — it was hard for me,” Paul-Gindiri told GOLF.com. “So, I decided to use one hand. On my first swing, I hit it good. It didn’t take me that long.”

Count me among the masses who have been captivated by the swing. Could this be the beginning of a new swing method? Could someone become a good golfer using this method? Is it possible to replicate? Could he actually be the real-life Happy Gilmore? All of these questions swirled in my mind as I replayed the video for the 100th time.

I decided to get the opinions from some experts, so I called up Dr. Sasho Mackenzie, a biomechanist who specializes in analyzing the physics of the golf swing, and GOLF Top 100 Teacher Jeff Leishman. Both were as fascinated by the swing as I was and were kind enough to share their thoughts with me. Here’s what they had to say.

Mackenzie told me his first impression of the swing was that it reminded him of the technique a hammer thrower might try to generate power to launch the hammer.

“It’s how I would try to throw the club if I were trying to throw it as far as I could,” Mackenzie said. “I’m just amazed that it’s repeatable.”

According to Mackenzie, a driver is just on the cusp of weight where it is easier to generate speed with two hands as opposed to one. With something lighter, like a badminton racket for example, it would be much easier to swing with one hand. In this regard, he was surprised that Paul-Gindiri had so much success with just his right hand.

“For most people, swinging a golf club with one hand is outside that comfort zone,” he said. “It’s just a bit too heavy, and a bit too awkward.”

He went on to explain that the wind up at the top of the swing allows Paul-Gindiri to generate more power as he’s putting more force on the club over a longer period of time. This allows for more clubhead speed as he transitions to the downswing.

But could this swing be used on the golf course where hazards and trouble abound? Would it be possible to become a solid recreational player with a one-armed swing? Based on my conversation with Mackenzie, it’s not likely. But it also doesn’t seem impossible. It would just take a tremendous amount of timing and control with one hand to square up the face on every swing.

When I got on the phone with Leishman, the first thing he mentioned was, you guessed it, the physics of a hammer throw. He was also quite surprised when I told him that Paul-Gindiri had never picked up a club before the filming of the video. Seeing a novice golfer blast balls like that, and with an unorthodox technique, is not something that is supposed to happen.

“From a golf perspective, there are some things, like his left foot jumping out of the way, which is an indication that there is some rotation happening with his body,” Leishman said. “I think that it’s a pretty efficient way, if he were to throw the club, how much velocity he were able to create.”

Like Mackenzie, Leishman also mentioned the windmill motion that can be used to generate power. He also was amazed by the flexibility Paul-Gindiri has in his rotator cuff to be able to shallow the club out in the proper way in order to make solid contact.

Once again the question of repeatability came up. Could this be used on a consistent basis? Are we seeing the real-life reincarnate of Happy Gilmore?

“It’s one thing to do that and create the speed,” Leishman said. “It’s another thing to get the clubface to match up … Trying that yourself, and not having the awarenss of the clubface and control of the club with that hand, you’d get some pretty wild [results].”

After talking with these two golf swing experts, it seems they aren’t convinced that Paul-Gindiri is the next Happy Gilmore. However, they were both tremendously impressed with the unorthodox swing. If nothing else, a week in the social media spotlight isn’t the worst way to spend a few days as a 21-year-old.