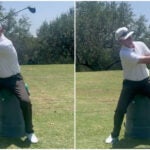 Keep your backswing planted on a high chair and swing as hard as you can with your arms.

Keeping your arms and body in-sync throughout your golf swing is an important part of consistent ball striking. That doesn’t mean they move at the same speed, but it does mean they’re moving in accordance with one another. Most golfers know it as a sequence, and if it gets off, there’s a good chance your ball isn’t going where you want it to.

One common issue higher handicaps encounter is that they over-use their body as they transition to the downswing. They heave the club over-the-top; their arms are just along for the ride, and the result is a big, weak, wipy-slice.

Ask any good teacher, like newly-minted GOLF Top 100 Teacher Brech Spradley, and they’ll often say the best solutions don’t require slowing one part of your body down, but rather speeding a different part of your body up. In the case of the lunge over-the-top, that means using the muscles in your shoulders, arms and wrists to move faster. It’s a power source that can often get overlooked nowadays, but one that three-time major winner Padraig Harrington says is an important one for the recreational golfer.

“Many golfers…start trying to turn and all these other things, when what they actually need to be doing is using their hands and arms to give it a good hit,” Harrington says. “These guys will hit it a lot farther with a shorter, whippier, hands-and-arms swing than they will with anything else, and that will keep them in the game for longer and enjoying it more.”

Which brings us back to Spradley, who shares on Instagram a simple way to give your arm speed a boost: Sit on an upside-down trash can (or a higher-top chair) and begin hitting golf balls. Swing hard and keep your backswing planted in the object the entire time. You’ll find the only way to hit the ball far is to activate your arms, wrists and shoulders. With your arms not able to tag along with your body for the ride, you’ll be increasing your hand speed by grooving a full release.

“Body pivot, sequence, ground force are all important, but without the lag and snap of the hands and arms you are missing out,” Spradley writes. “Your body is certainly the big engine, but the hands and arms need to crank for speed, especially with the big stick.”

Check out some videos of the drill below:

For more help with your game, get fit for clubs by the experts at our affiliate company, True Spec Golf.