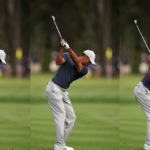 Your trail arm has an incredibly important role in the golf swing, one with the ability to both help — and hurt — the outcome of the shot you’re about to hit.

When something goes wrong in a golfer’s downswing, it generally does so in one of two ways: Either the arms both work too far behind you at the start of the downswing (otherwise known as getting “stuck”), or they work too far in front of you (better known as coming “over the top”).

Both problems are often related to how your trail arm is working, says one of one of our longtime GOLF Top 100 Teachers, Jon Tattersall, who shared an interesting video that could help sort out your own swing issues.

As Tattersall says, your trail arm — which is your right arm for right-handed golfers, or left arm for left-handers — can and does a variety of different things on the backswing.

“The right arm can fan a little bit, it can rotate, and it can lift. All those things happen in most people’s backswing,” Tattersall says.

“The problem is that when people get [to the top of their swing] they don’t undo what they just did in the backswing with their trail arm.”

And therein lies Tattersall’s advice, which can serve as a good swing thought for the rest of us: Take note of the way your trail arm is moving to the top of the backswing, and as you start the downswing, focus on trying to un-do what it just did.

This is easier said than done, of course, but give it a try yourself. Undo your backswing as you start your downswing; see if it works for you.

And watch Jon’s full video below: