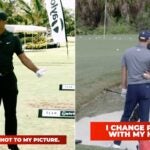 TaylorMade released a video of Tiger Woods talking golf, and we can't get enough.

In a shock to no one, there’s been a lot of Tiger Woods news this week. Woods is the tournament host for his Hero World Challenge in the Bahamas, which has been his first public media appearance since his February car crash.

Woods spoke to the media on Tuesday and didn’t unveil much about when he planned to return to competitive golf, but a video the PGA Tour released Wednesday of Woods on the Albany range fueled speculation once again.

So naturally, with all eyes on Woods, TaylorMade got in on the action too, releasing a seven-minute behind-the-scenes video featuring the 15-time major champion. This video, of course, was from before Woods’ accident, so it came straight from the TaylorMade vault. Woods is a TaylorMade staffer and this came via a shoot with other TaylorMade pros like Rory McIlroy, Jon Rahm, Dustin Johnson and others. It’s loaded with great Woods insight into ball-striking and shot-shaping, and he sprinkles in some helpful tips along the way.

Here are some of the highlights:

— There are a ton of great Tiger-isms in here, which is probably why the video is titled, “Tiger-isms 2.0.” For example, Tiger tells DJ he’d “feel cutty and length” while talking through shots form the bunker and then drops in the term “reachy” for good measure.

— “Absolutely not,” Tiger says, when asked if he manipulates the handle in relation to ball position to hit draws or fades. “I do it all basically with my hands and my (club) face. I’ve never even thought about shaft angle and all that kind of stuff. I don’t understand this.” He then stands over a ball, says he’s going to aim at a red flag and “turn it just a touch,” and hits a beautiful high draw.

— During a punch-shot drill, in which pros fired off low bullets to knock out their faces superimposed on window panes, Tiger takes out four in a row.

— This quote: “I’m hitting my shot to my picture, so that gets rid of all mechanical thoughts. I just put all the information in, and what shot I want to hit, how far I want it to go, what trajectory I want. I put all that in, and then it’s all in my feel.”

— A quick tip from Tiger, which he said came from his dad, Earl: “So my dad used to say, if you want hit one low, have your hands stop about rib high. If you want one a little higher, (stop) about shoulder height. If you wanna hit the highest shot you possibly can, make sure your hands finish above your head.”

— He says he practices bunker shots with his 8-iron all the time.

— Tiger also gave some fascinating insight into gaining intel from playing partners during tournaments. “I know how far I’m going to hit it, but when we start sneaking and looking at other guys’ bags, or watching what they are hitting, just knowing that, ok, this guy’s got strong lofts, this guy plays an X ball, he plays a harder ball. Then you listen to how he hits it.” Asked if he thinks that way during tournament rounds, he said “Absolutely.”

There’s lots more, but we can’t give all of it away here. In fact, the only thing we don’t like about the video? It’s not twice as long. Check it out below.