The right (and wrong) way to praise your golf-loving kids 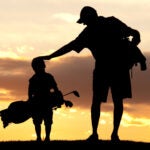 Praise the process, not the outcome.

Golf, when you take a step back and look at it, is an unreasonably difficult game. It often takes new golfers a year or two to feel comfortable on the golf course, at which point a whole new set of problems emerge. Countless more years later, perhaps a single-digit handicap is reached, but along the way you’ll be introduced to a host of ever-changing unwritten and written rules that continue to stump even seasoned professionals.

It makes sense, then, that if your kids somehow find themselves hooked on the same game that you fell in love with, you’d do everything in your power to keep them enthusiastic about it. And, because golf itself provides more than enough negative feedback in the form of bad shots, hazards and everything else, it makes sense that you’d attempt to counterbalance those feelings with plenty of positive encouragement.

Except, all that well-intentioned praising might be doing more harm than good.

The concept of “overpraising” — and the harm that comes from it — was the a subject of an interesting New York Times column over the weekend by Paul L. Underwood. It wasn’t about golf itself, but because this is GOLF.com, we couldn’t help but draw parallels. The points within were so immediately relevant to golfers.

The wrong way to praise your golf-loving kids

As the article explains, the movement to encourage parents to praise their kids more took hold in the 1970s, as a reaction to the more “discipline-oriented parenting styles of earlier generation.”

But as time went on and researchers began to dig their teeth into the subject, they found that all those “you’re greats” and “you’re so smarts” can have a negative effect on your child’s confidence because, in short, overpraising your kids can make them dependent on receiving constant validation. Instilling that need for praise can actually have the undue effect of increasing pressure on them for fear of letting their parents down.

And so, when it comes to golf, avoid falling into the overpraising trap by avoiding a lot of big, general compliments. Use the “You’re an amazing player!” or “You always hit your driver so well!” r “You’re such a fantastic putter!” very sparingly, because too many of those can create an unrealistic expectation your kids will try to live up to — and eventually fail at.

The right way to praise your golf-loving kids

It’s not that praising your children is bad, it’s that you want to praise the right things. Instead of many big, overarching compliments, focus instead on praising the process. Specific things. And the good news is that in golf that’s actually pretty easy.

“You’re such a fantastic putter!” becomes “You work so hard on reading greens.”

“You always hit your driver so well!” becomes “It’s interesting that you took two practice swings before that drive.”

The goal, basically, is to use a compliment to spark curiosity in your child, so they enjoy returning to the course to improve at the game you (both!) love.