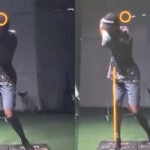 The wrong combination of swaying and tilting meant this golfer was swinging 14 degrees over the top.

As golfers inch their handicap lower along their path to better golf, most of them, inevitably, will find themselves needing to navigate a common problem: How do I stop swinging so out-to-in (or over the top), and start swinging more in-to-out?

A swing that’s too over the top generally causes a combination of big slices, or wicked pulls, and usually gives way to contact errors like tops and chunks. That’s what a recent student of GOLF Top 100 Teacher Jonathan Yarwood was struggling with when he came for a lesson. He was swinging a whopping 14 degrees from out-to-in with driver (for context, a “neutral” swing path is zero) and hitting almost 10 degrees down on his driver. Higher skilled golfers who swing the club at the same speed tend to slightly hit up on the ball.

Poor contact was an issue, but when he did catch one, the ball was a low, hard pull-cut that was difficult to control.

The issue, Yarwood says, was the wrong combination of swaying and tilting.

“There was no upper torso sway, there was just hip sway. As a result, it was hard to get out of that position,” Yarwood says.

The combination of too much upper-body tilt with too much lower-body sway gave his swing a reverse pivot look, which Yarwood shows below using Sportsbox AI, and it was causing his student to send the club both too far left and steep.

So, they set about reversing the problem position.

Hips toward target, torso away from target

“We exaggerated one of him doing the opposite; feeling like his hips would move [toward the target] and his torso would move away,” he says. “That allowed him to start to shallow it and come from the inside.

You can see a before and after of the position below.

With his head more over his right foot at the top of the backswing, and the final addition of a pool noodle to make sure he keeps his swing shallowed-out, Yarwood’s student started hitting up on the ball and swinging in-to-out for little draws.

All that’s left now is to practice the new move, and reap the benefits of a nice new ball flight.

You can watch an abbreviated version of Yarwood’s video below: