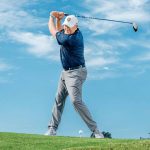 If you're looking to add extra power (and extra yards) to your game, try this move inspired by six-time major winner Nick Faldo.

In 2002, Nick Faldo was inexplicably in contention at the U.S. Open at the behemoth Bethpage Black. When asked how that was possible for the 45-year-old Faldo on such a long and brutal course, he said that he had to give up the restricted hip turn of his heyday and free things up.

There aren’t many amateurs who wouldn’t benefit from Sir Nick’s wisdom. Lower body rotation is a really good thing. What makes it easy to rotate the lower body is allowing the left heel to come off the ground to finish the backswing.

As fellow Top 100 Teacher Kevin Sprecher has touched on previously, lifting your left heel allows your torso to rotate a great deal more during the backswing. This makes it much easier to attack the ball on a more neutral path. Additionally, the increased turn allows for a bigger backswing, a more dynamic transition into the downswing and a subsequent increase in clubhead speed.

Faldo figured this out almost 20 years ago at the U.S. Open. Jack and company 30 years before him. Don’t waste any more time … lift up that heel!

Brady Riggs is the director of instruction at Hualalai GC in Hualalai, Hawaii.