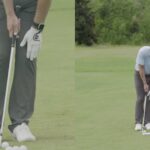 Touching your lead knee with your lead hand can help align your posture.

It’s quite rare that I meet an average golfer who loves chipping. They don’t hate it, by any means, but more often than not they see it as golf’s form of Russian roulette. Sometimes it’s fine, other times they’re hit with a case of the skulls and chunks that scares them off.

But the funny thing is that chipping doesn’t need to be that difficult. Ask any of our GOLF Top 100 Teachers, and they’ll explain most of the mistakes lie in the setup. Get that right, and you’ll probably hit a good chip.

That’s why I enjoyed GOLF Top 100 Teacher Andrew Rice’s new “Breaking Bad Habits: Short Game” Golf Channel video series, which you can check out for yourself right here on GolfPass, so much. In it he doesn’t just run through the importance of the setup when chipping, but also provides a handy trick to help you nail it down, every time.

In episode two of the series, Rice addresses the bad habit of leaning too far back on your chip shots. He says that most golfers know they need to keep most of their weight on their front leg when they setup to hit a chip, but sometimes they compensate the awkward feeling by leaning their upper body back away from the target.

“Clearly that upper body tilt has shifted their weight back more than the golfer feels like,” Rice says, adding that doing this can lead to chunks and skulls.

Thankfully there’s an easy way to correct this bad habit before it negatively effects your game. Take your setup with your weight forward, and then read down with your lead hand and touch your lead kneecap.

This isn’t going to be how you look when you hit the ball, but it will prevent your torso leaning too far away from the target. That way, when you do re-grip your wedge, your torso will be more aligned with your lower body, your weight on your lead foot, and you’ll probably hit a good chip because of it.