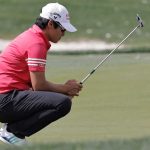 Yani Tseng during the ANA Inspiration earlier this year.

Yani Tseng, a five-time major winner and a former world No. 1, shot a 16-over 87 during Wednesday’s first round of the Hugel-Air Premia LA Open, then was disqualified after the round when she failed to sign her scorecard.

Tseng was listed on the LPGA’s online leaderboard on Thursday as having just DQ’d. But Golf Channel, which is broadcasting the event, showed on its site that Tseng shot 87, and on Thursday, Golf Digest reported that Tseng was disqualified for failing to sign her scorecard.

The disqualification is Tseng’s latest setback.

From 2008-12, the 32-year-old won 15 times on the LPGA Tour, became the youngest player (22) to win five majors and rose to world No. 1, where she’d stay for 109 straight weeks. But following three victories in her first five starts to start her 2012 season, she hasn’t won since. Injuries have also become an issue. After four missed cuts and a WD to start her 2019 season, Tseng suffered a back injury that forced her to miss the rest of that year and all of 2020.

She’d return at the Gainbridge LPGA at the end of February, but has to break 75 in now five events. On Wednesday, Tseng opened with four bogeys and a triple on her way to a front-nine 42, then made six bogeys and another triple for a 45 on the back.

Entering the LA Open, Tseng had remained optimistic. On her social media channels on Tuesday, she wrote: “烏雲總會散去，太陽依然會升起,” which according to Google translate reads as: “The dark clouds will always disperse and the sun will still rise.”