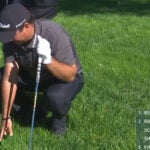 I was looking forward to talking about something fun this fine Monday morning, like the way Patrick Reed hits bunker shots or the way Kyle Berkshire swings a golf club, both of which are super interesting (at least to me). But alas, we’ve got another convoluted golf rules saga, so those topics will have to wait for another day as we spend today’s Play Smart breaking down the latest rules drama in golf.

In case you missed it, somehow, here’s what happened on Saturday at the Farmers Insurance Open:

1. Patrick Reed hit his ball into the left rough.

2. Walking up to his ball, he asked the marshal if his ball bounced.

3. The marshal told him that no, the ball didn’t bounce.

5. Apparently unsure if his ball was in an embedded lie, he called over a rules official and in the meantime, placed his ball off to the side.

6. The rules official deemed the ball was embedded, and granted Reed a free drop.

It was point No. 5 that proved to be the controversial one.

Reed didn’t do anything wrong by the letter of the law, and he actually went a step further than Rory McIlroy, who encountered the same issue on Saturday. It was Reed’s general approach that sent Twitter into a bit of a tizzy.

The general consensus was that Reed was looking for confirmation his ball was indeed embedded rather than clarity about whether it was. The best analogy I can think of is that it’s like if a customer at a restaurant ordered a beer, dank half the beer, then called the bartender over to tell them they think the beer is flat and want a new one.

But as Iain Carter over at the BBC points out, Reed is also being judged by a different set of standards based on his past — “it’s guilt by association,” he quotes one anonymous rules official as saying.

Maybe you think that’s right. Personally, I’m not a fan of that attitude. Even if someone’s been guilty of something in the past, you have to judge the individual case in front of you on the evidence, with the presumption always being innocence until proven guilty.

And while Reed didn’t break any rules, I would offer him — and every other golfer listening — a simple piece of advice that may help avoid any rules controversies like this in the future.

When in doubt, immediately stop and get a second set of eyes

Ultimately, golf is an honor system. In a toss-up rules situation, the player’s word will determine the outcome more often than not. But I’ve played in enough junior tournaments to know that whenever you find yourself in a situation where you’re not sure about what to do rules-wise, you should always, always, always not touch the ball, and ask your playing partner to come over to your ball and supervise.

Do you need to do this? No, you don’t need to. And yes, it does slow down the process slightly, but for an eminently acceptable reason: You don’t just get a second set of eyes to help you solve your current predicament, it shows that you’re making a good-faith attempt to navigate the rules properly and earnestly.

Once you mark and pick up your own ball without any supervision, even if you’ve told people that’s what you’re going to do, you’ve taken matters into your own hands and are opening yourself up to criticism. Asking your playing partner to come over and take a quick look before you mark and handle your golf ball eliminates any potential future drama.

If together, you and your playing partner still aren’t sure what to do — and unlike Tour players, you don’t have a rules official to help you solve it immediately — you should play it as it lies, then drop a second ball under the potential ruling, hole-out both, and resolve the issue after your round.