‘Strange one’: Pro hits out of water, gets rock stuck in club, calls for ruling 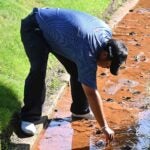 Kiradech Aphibarnrat on Saturday on the 12th hole at Wentworth Golf Club.

A shower. A 10-yard shot. An ovation. All of which preceded this:

“It’s a game that keeps on giving, doesn’t it?” an announcer on the Golf Channel broadcast said. “Just when you think you’ve seen it all.”

Indeed. What Kiradech Aphibarnrat’s 10-yard shot lacked in distance, it made up for in being different.

It all started when Aphibarnrat, during Saturday’s third round of the BMW PGA Championship, had hit his tee shot into a drainage ditch marked as a penalty area on the par-5 12th at Wentworth Golf Club. He elected to play it from there, swung, and the ball splashed out while Aphibarnrat was doused.

“Oh, that’s a crowd pleaser,” an announcer on the broadcast said amid cheers. “Not a day for white trousers. That’s pretty mucky in there.”

Apparently. He had connected with more than a ball. As Aphibarnrat walked out, he flipped his club over and stopped.

Inside his club was a stone.

The official was called.

“The reason why he called the ref, Aphibarnrat, he’s actually, when he played out of that penalty area, he got a rock stuck in the club on the face,” the second announcer said. “But the referee has deemed that it’s legal.”

“He can’t get it out. It’s wedged in there,” the announcer said.

But he was allowed to play on with the club. The rule in play here was likely Rule 4.1a, which states “no matter what the nature or cause of the damage, the damaged club is treated as conforming.”

Aphibarnrat would go on to par the hole, shoot a two-over 72 and sit four strokes behind leader Francesco Laporta.

“Never heard of that before,” the first announcer said.

“No, I’ve never seen that,” the second announcer said. “Strange one.”