Rules Guy: Can you refuse a playing partner’s request to leave your ball mark near their putting line? 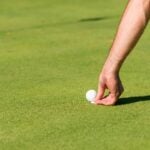 What do the rules say about marking your ball against your playing partner' wishes?

A playing partner marked his ball that was near my putting line. Then he started to move the marker a putter-head away. I asked him not to move the marker — I secretly wanted to use his mark as a reference point for my putt — but he moved it anyway. Can he legally move his marker despite my request to the contrary?
—Leonard Smith, Tucson, AZ

Rules Guy is not a gambling man, Leonard, but if he had to wager, he’d say your opponent was in on your little “secret.”

Either way, though, he was well within his rights to give your ask the Heisman, as it were — under Rule 15.3c if a ball marker might help or interfere with play the player may indeed move it out of the way … whether you like it or not. Mark that down.

For more marking-related guidance from our guru, read on …

Is it required to mark your ball when it’s on the green, whether it’s in the way of another player or not? Yesterday, I was playing with our golf pro, and he got so angry with another player because he didn’t mark his ball, even though it wasn’t in the pro’s line. The pro said that all the balls on the green must be marked … but my online research so far doesn’t seem to support that.
—Liz Grebler, via email

This pro doesn’t sound like much of a people person — never mind that he is in the wrong, or at least partly in the wrong.

Under Rule 15.3, a ball at rest on the putting green only must be marked and lifted if it is interfering with play or helping another player; otherwise, there is no requirement to do so.

That said, a player can always request that you indeed mark your ball (again, if it can reasonably be deemed to be interfering or helping on the putting green) in which case you must accede to that request (making the request in essence a demand, but it sounds more polite the other way).

So, yes, the pro can make everyone mark his or her ball, but that’s not the same thing as declaring, “All balls on the green must be marked!” He might be better suited to a less customer-facing profession.