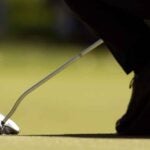 Are you still allowed to use a club when you've made some DIY tweaks to the head at home?

I have an old Odyssey 2-Ball putter. One of its plastic discs fell out, so I pulled out the other one, then cut golf balls in half and glued them in as replacements. Has my modification made the putter illegal? —Michael Karlins, Chesapeake, VA

Kudos, Michael, to your DIY skills — but your “hack” is indeed impermissible.

The clubhead must be “plain in shape” under the Equipment Rules Part 2/4a, and by adding the halved balls you’ve rendered the putter nonconforming. Make a stroke with it, and you’re disqualified.

Read on for more club-modification guidance from our guru …

I was recently playing with a friend whose 9-iron snapped somewhere mid-swing. That much is agreed upon, but then the stories diverge. I saw him begin his downswing and, about halfway down, feel something odd and finish his swing, albeit not at the ball. He recalls starting the downswing and stopping halfway down. A third member of the group says he stopped at the apex of the backswing. Should a stroke be counted? —Joe Bock, via email

First, Joe, Rules Guy suggests you Google “Rashomon effect,” and then go watch the great Akira Kurosawa film that the term references. (For the lazy and/or Philistines among us, the Rashomon effect is when the same event yields contradictory interpretations by different people involved.)

In golf, a stroke is defined as “the forward movement of your club to strike the ball.” Apex of the backswing wouldn’t cost Mr. Snappy a stroke; in every instance of starting the downswing, it would, with the lone exception of the player immediately stopping the swing upon shaft breakage.

Even swinging away from the ball still counts as a stroke in this instance. In match play, the group can make the determination of when the shaft broke among themselves; in stroke play, you’d want to present all the viewpoints to the film critics, er, golf committee, and let them sort it out.