Rules Guy: Can you be penalized for playing out of turn? 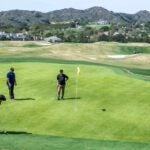 What do the rules say about playing out of turn?

I was recently watching the end of the 2021 Farmers Insurance Open. In the playoff, Luke List tapped in for birdie before Will Zalatoris attempted his much longer birdie putt—which he subsequently missed. What rule of golf permitted List to play first, when Zalatoris was obviously away?
—Noel Green, Ajax, Ontario, Canada

What let List leap ahead? Neither the Golden Rule nor a local rule, just good old Rule 6.4b.

There is no penalty for playing out of order in stroke play, and a playoff is just another stroke-play round. (This is provided two players don’t agree to play out of order in order to give a player an advantage, which clearly isn’t applicable here.)

Even in match play, there’s no penalty for playing out of turn, just the ability of the wronged party to cancel said stroke if desired.

For more penalty-guidance from our guru, read on …

I was at the bottom of a steep greenside bunker. Immediately after hitting my shot, I smoothed the sand with my foot — only to then look up to see the ball hadn’t cleared the trap and was rolling back to me. Of course, it stopped exactly in the spot I’d smoothed. Was this a penalty?
— Tom Metzner, via email

Loyal readers of Rules Guy know that, in addition to favoring the third-person plural when referencing ourselves, we often underscore the notion that being aware of what’s going on around you, like knowing the Rules of Golf, generally works to one’s advantage … except, that is, when the opposite is true.